California's divorce process is truly difficult. Whether the marriage lasted six months or 60 years, a divorce can turn into a total disaster. Numerous state and federal laws must be upheld, and you have to account for literally everything you’ve gone through during your life together.

One of your most important assets during a divorce is a lawyer who can guide you through the pitfalls and turmoil you will face. But in California, it costs an average of around $15,000 to retain a divorce lawyer, far beyond what many people can afford to pay.

That’s why Divorce Lawyer Sandro Tuzzo decided to simplify the process and make it much less expensive, by partnering with our team to create Separate.us.

Both spouses don’t have to work with Separate at the same time – just one of them can start using the platform. It provides a smart way for completing the divorce, with the support of a lawyer and without spending any extra money.

"There are tons of dating apps that connect people, but what if you need to disconnect? There's nothing."
– Sandro Tuzzo, a Founder

After you sign in, you first have to take a five-question eligibility test. If you qualify, the platform asks simple questions about your marriage and then the back-end engine automatically fills in all of the necessary forms behind the scenes with the help of the platform’s databases.

The interface is user-friendly and the process is not complicated. In the end, you get all the divorce papers prepared for court at a very affordable price. Moreover, at any time during the process, you can receive help from a professional lawyer if there’s something complicated you need to clarify.

The startup's highest achievement was participation in The Startup Battlefield on TechCrunch Disrupt in San Francisco, where Separate.us was not just a participant but became one of the finalists in the competition.

To complete the project, we needed three specialists: a full-stack developer, a project manager, and a designer.

The entire functionality of Separate.us was implemented in nine months.

To implement all of the desired functionality of Separate.us, our team used the following tools for project development:

Who spoke about the project

Separate.us had pretty wide coverage in the media. During the Disrupt conference, TechCrunch told the whole story behind the project, explaining how our client came up with the idea of a virtual divorce assistant.

Next, media giants like Time, The Economist, The Week, and Esquire published articles about the project. In their article, Time wrote that “a new website aims to take much of the heartache and cost out of getting a divorce by conducting the whole process online.”

Stanford Law School published their entire interview with Sandro Tuzzo about Separate.us, where he said that “by combining technological tools along with access to limited legal consultation, more people will be able to afford enough help to get by.”

While developing Separate.us, our team faced some specific challenges that we had to overcome.

The first was a complex decision tree. It’s hard to calculate the many factors that influence the divorce process in California, and all of them need to be taken into account. This results in a nearly endless number of possible scenarios arising from people’s answers, and a huge and complicated decision tree.

Filling in the forms had to be a quick “real-time-like” process, but the decision tree was too large for this. As the speed of requests slowed down, the size of the decision tree became one of the project’s challenges.

Another problem arose from the PDF files Separate.us had to automatically fill out. American courts have a standard set of questions to be answered for divorce forms. What’s the problem then? Well, the PDF files for the same forms vary from court to court (and sometimes they are also poorly printed). This turned the autofill process into a very complicated task.

The challenges of the project were special, and so were the solutions. To implement a complex decision tree, we used graph databases to represent and store the data, not in tables, but in a tree-like structure. In addition, we used a special admin panel where all possible scenarios of answers were built and formed into decision trees. For example: 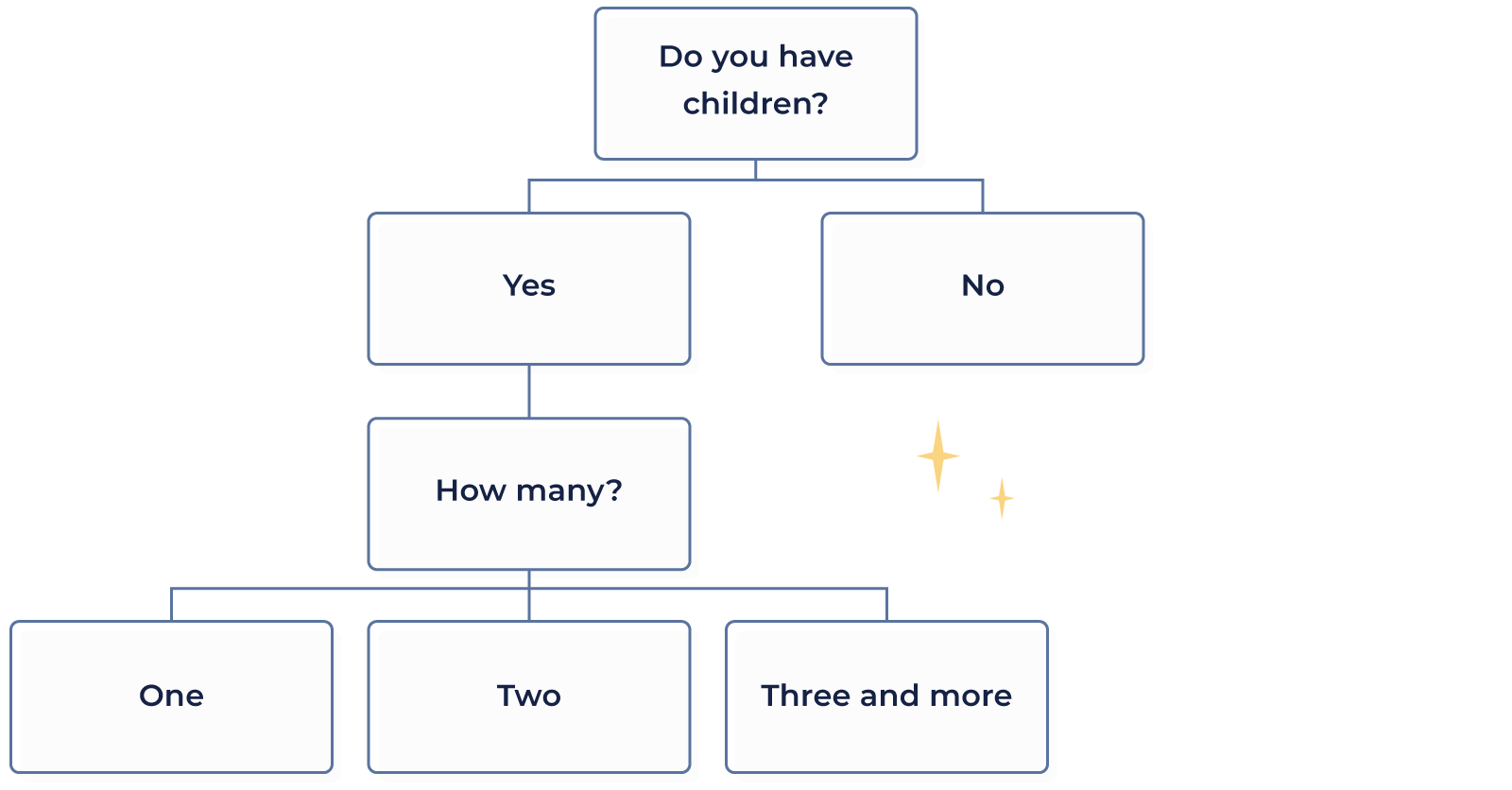 After doing that, the trees were rendered and put into a database. This served to speed up the dialog between the user and Separate.us by eliminating the need to create everything anew each time.

The Starter Plan includes only preparation of the initial divorce papers, the first part of the three-step divorce process. This plan also provides a spouse with limited legal guidance that enables them to do most of the process themselves, saving their time and money.

The Get This Done Plan helps accomplish the divorce completely, from filling in documentation to the divorce agreement. With this plan, it’s possible to track the divorce through the court system, receive daily notifications about any changes in the case, and even make an electronic name change request.

In the end, we developed an easy-to-use online divorce service for Californians who wanted to complete the complex and expensive divorce process both quickly and affordably.

Not all love stories end up with “happily ever after.” A marriage license doesn’t guarantee that you will stay with a person “till death do you part.” Sometimes it’s better for a couple to cut the cord and start a new, independent life, and Separate.us can be a perfect solution for this.

How We Developed Drive Focus, the Perfect Training Tool for Enhancing Driving Skills

7pm Thursday – A Dating App for the Next Generation