Selecting and building a proper architecture is the number-one task on a to-do list in software product development. The most common options are to build your app with either a monolithic architecture or microservices.

Well, to be honest, it's possible that there is no winner as both architectural types can be beneficial for different purposes. The only question is how to pick the right one for your particular case. Let's take a closer look at all the pros and cons of both to find the answer.

Monolithic architecture in a nutshell

What is monolithic architecture and how does it work? In this case, "monolithic" means the one built as a solid structure. It's considered to be a traditional way of building apps. A monolithic architecture is designed as a single-piece unit and is meant to be self-contained. Its typical structure includes a database, a client-side user interface, and a server-side application. These components are interdependent and closely united rather than loosely connected. In a tightly-coupled architecture, each component must be present for code to correctly function, so apps built like that usually have one large codebase.

Well, imagine we are creating a complex application using monolithic architecture. This is what it looks like—all components exist as a single piece of code, each sharing a single database with the rest. 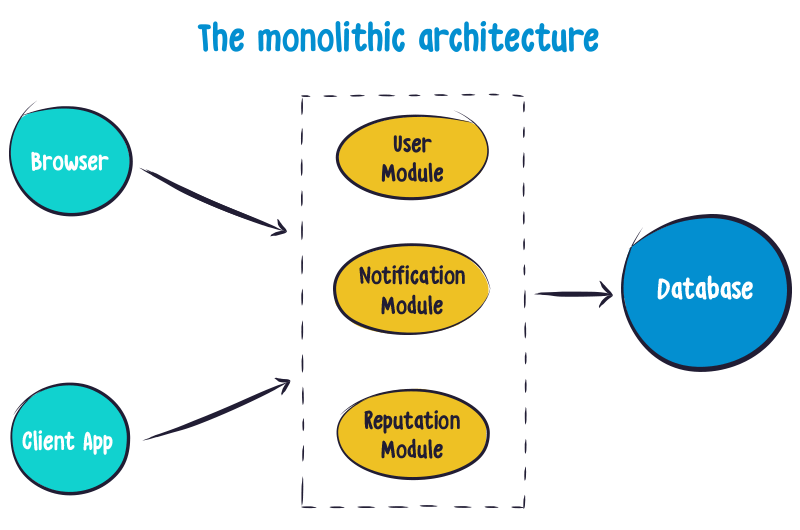 Here are the pros a monolith can give to your app:

However, monolithic architecture is not perfect and that is why:

And what are microservices then?

A microservices-based architecture takes a different approach to structuring code. The whole app is divided into smaller parts that are loosely coupled, being as independent of each other as possible. It's considered a modern way of building apps, which is quickly gaining popularity.

How does it work? Let's again take the example of building a complex app. If we implement it with the use of a microservice architecture, it would look like in the picture below. There is no single piece of code but a bunch of separate services, each with its own database and a single entry point to all of them. 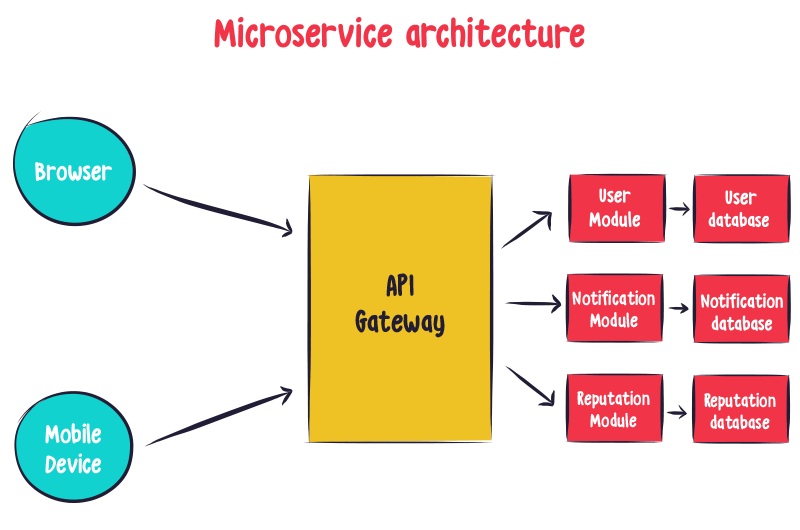 These are the reasons why microservices are considered more efficient:

Again, microservices have their own drawbacks:

Both architectural styles, monolithic and microservice, have their own advantages and disadvantages. Still, you can use only one architecture for each project. So, which one would address your goals the best? Let's discuss some of the most important characteristics of both architectures and find out.

As we mentioned above, a monolithic architecture implies that an app is built as a single undivided unit. That is why it requires using a shared technology stack for all its structural elements. In that case, developers don't really have the freedom of choice, and it may become the reason for delays in deployment or quality issues. Additionally, though it's still possible to migrate from one technology to another, you may face challenges due to tight connections between the functional elements.

Microservices, on the other hand, have a great advantage here. Each microservice is an independent module that can be developed with its own technology and maintained by a separate team. Each team is free to choose the most suitable and up-to-date stack for implementing their function.

At first glance, it may seem that a monolithic architecture is bulky compared to the small modules of microservices. In reality, it is not that simple. As we have already mentioned, microservices can easily use different programming languages and frameworks, and such independence seems great. But the more microservices we built with different tech tools, the more complex the structure becomes. The codebase of such apps can grow exponentially, which can significantly overload your development environment, and there is a huge possibility of overlapping code in different microservices since they have to be independent of each other.

A monolithic architecture, on the other hand, looks simple: everything is tightly connected, so there are fewer cross-cutting concerns such as logging, caching, and performance monitoring. Besides, it's less time-consuming to test and debug monoliths with fast end-to-end testing.

Though tightly coupled parts can help with testing and deployment, it can be hard to see the big picture in a monolith. Such an app can quickly become a ball of thread, making it hard for the development team to read the code with all those connections and closely related parts in the monolith, especially in times of scaling-up. New developers joining the project will most definitely struggle at the beginning because they have to understand how the app is composed in its entirety.

Microservices address that challenge with their loosely coupled structure. Because each microservice is smaller than a monolithic structure, the developers can clearly see what task each module performs and what piece of code needs to be improved. Also, training and onboarding new developers in microservices teams is a much more seamless experience.

Talking about performance, a well-designed monolith is usually more powerful than microservices. For example, a program with 30 microservices in its architecture requires 30 calls to load each screen, which might affect performance. A monolith, on the contrary, provides faster communication between software components through code sharing.

Regarding resource usage, a monolithic architecture seems to win again. If a microservice does the same work based on the same algorithm, it will take more resources compared to a monolith. However, microservices offer a different advantage—they allow us to use resources smarter. The manager responsible for microservice performance can allocate these resources accordingly to meet the needs. As a result, it makes a huge cut in the total of consumed resources.

We are here to build the right architecture for your app.

Scalability is one of the most important characteristics of an app as each business wants to grow and attract more users. In this regard, microservices are preferable because of their independence. Microservices can have their own tech stack and their own team, so it's easier to create another module with the necessary function and connect it to the whole structure, or to delete an unnecessary part and replace it with another one.

A monolithic architecture is less flexible. To change something inside a monolith or to add/delete other functions, you would have to go through the whole app and update it in its entirety. If a part of the app is overloaded, you would have to distribute the entire app across multiple servers. That requires more resources, which are also likely to be used inefficiently. Therefore, it is not possible to horizontally scale a monolithic architecture.

Deployment is a contested part of this discussion because both microservices and a monolithic architecture have their pros and cons here. Deploying a monolith can be as simple as copying, and that's it. This may make programming a little easier, but it will eventually take away the flexibility that is a must-have in an agile development process.

In contrast, microservices operate in the background as a sum of isolated parts. Therefore, a developer can modify the application using a single microservice without modifying other connected services. Besides, an error in one microservice only affects one specific service without disrupting the work of the entire application. But the same independent structure and tech stack flexibility make microservice deployment more complex since each of them requires a different approach.

In a monolithic application, understanding what's going on in the system is as simple as opening the necessary log files. An app built with a monolithic architecture communicates only to itself, so its interconnections are easier to monitor.

With microservices, the registration and monitoring are complicated. When system-based service scenarios are pervasive, it is difficult to understand what happened and why. The relationship between services must be monitored all the time. Downtimes, outages, updates, or fixes can have a significant effect and should be foreseen and analyzed.

Yet, this issue can be solved with centralized logging services. They are an important part of the technology that enables microservice management. Centralized services allow all microservices to write outputs and metrics in one place so that you can use various aspects of observation through the distributed microservices system.

Microservices vs monolithic architecture: a summary

Here is a summary comparing microservices and a monolithic architecture:

How to choose the right architecture?

Firstly, define if your project needs constant and stable growth or not. If the answer is yes, a microservices architecture is for you, if not—a monolithic one will be enough.

The next step is to calculate your available budget for the maintenance of the final product. Maintaining microservices is comparatively more costly. So if you don't reserve a large long-term budget, you'd better go for a monolithic architecture.

Time is also of consideration here. Sometimes developing a monolithic architecture is faster as it doesn't require running multiple concurrent micro-projects and thus the app can be released faster. However, making any post-release changes to a monolith is more cumbersome, as discussed above, so the time gain benefit might become non-existent down the line.

As you can see, there is no one-size-fits-all solution. A monolithic architecture is simple yet bulky. Microservices are flexible yet complex.

Microservices are generally more suitable than monoliths, as a microservice architecture provides a better way to manage growing databases, use cloud storage and automation faster, and apply more solutions. But they may not always be a good option for an organization that hasn't fully grasped agile development quite just yet. Before choosing microservices, you should carefully consider your company's culture and business goals. 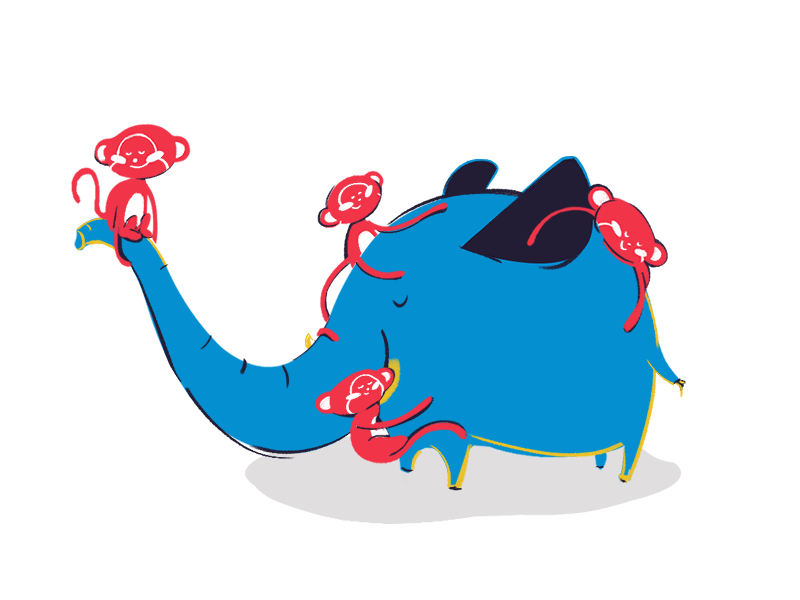