Here, we continue praising Selenium. We provide the top 10 reasons why we completely love this tool, although we also mention a couple of cons. Still, we conclude that humans should remain the driving force behind testing for at least a couple of decades.

Selenium PROS. Why is it so popular with the whole world and us too?

While we have already mentioned how much we love Selenium, apparently the whole world does too. Here are some statistics from iDatalabs demonstrating Selenium’s popularity on the automation testing market. First, Selenium occupies the biggest share on the market of software testing tools. 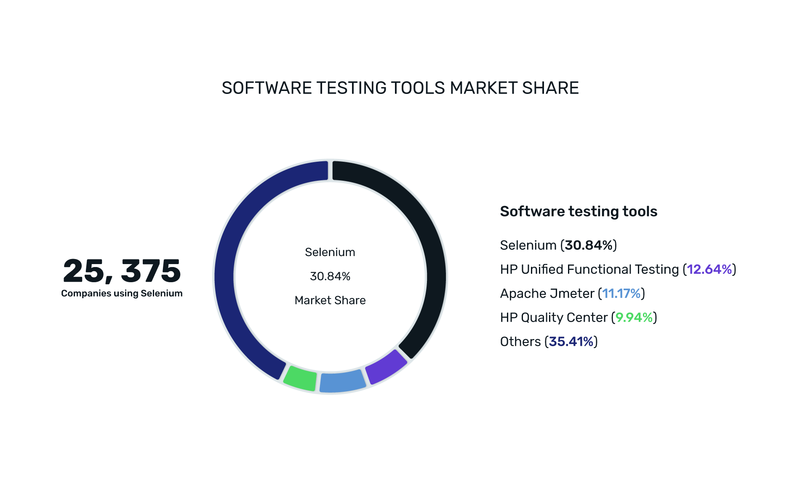 Second, numerous industries use Selenium in their activities. Computer software (27%) and information technology (12%) are the largest segments that use Selenium, yet it's also popular with health care, recruiting, financial services, and higher education. 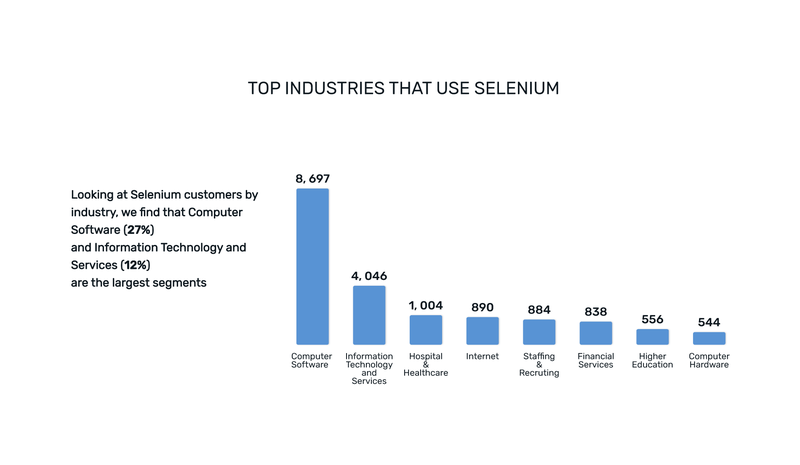 So, why do we praise this instrument so much? Here are the top 10 reasons why we love Selenium.

No, that is not a joke. Selenium is portable and open source. You can freely download the tool and even obtain free community-based customer support.

Selenium’s interface is user-friendly; therefore, running tests is quite easy. Users can watch the execution of tests in all browsers. The interpretation of the test results is also clear. Apart from that, due to Selenium’s open source nature, users can script their own extensions and develop customized actions.

In particular, Selenium supports all the most used programming languages, such as Java, Perl, Python, C#, Ruby, Groovy, Java Script, and others.

Selenium remains one of the few mainstream tools that operates and supports Linux, apart from traditional Windows and Mac. Moreover, with the help of Selenium Suite, you might create test cases on one platform (for instance, on Windows) and later run them on another platform (e.g. Linux).

Selenium provides support across Internet Explorer, Chrome, Firefox, Opera, Safari, and other less known browsers. Apart from that, Selenium IDE can be used as a plug-in with Firefox and since 2018 with Chrome. 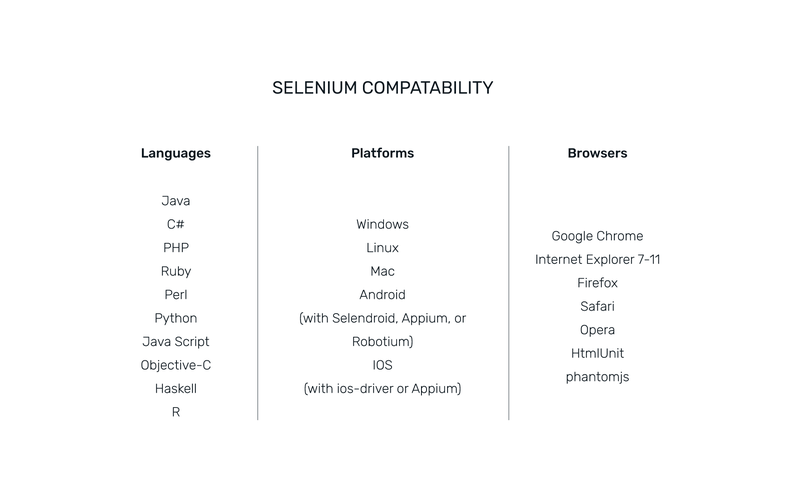 Selenium easily integrates with various development platforms, including Jenkins, Maven, TestNG, QMetry, SauceLabs, and others. When developers use Selenium Grid, they do not need to wait overnight to receive the test feedback.

With Selenium, you can also test mobile apps, although you’ll need additional software, such as Appium or Selendroid–both Selenium-based, both open source and with strong communities. While Appium supports iOS, Android, and Windows devices, Selendroid focuses exclusively on Android.

10. Selenium has a wide range of plugins

Selenium can actually do more! A range of specific plugins, such as Appium or Selenoid, might expand Selenium’s standard functionality. Plugins exist for all of the tools from the Suite, including WebDriver, Grid, and Selenium IDE. In the latter case, plugins are particularly helpful.

...and we don't have any cons!:) Just schedule a free professional consultation and see yourself;)

We actually never say how much we love a particular software without mentioning a couple of its flaws. Unfortunately, Selenium does have some, yet all of the flaws can be dealt with by way of third-party solutions.

Today, automated testing moves towards the trend of codeless testing, which allows for performing tests by people without extensive knowledge of programming languages. Some testing tools already provide an option for testers to write scripts and receive feedback yet skip the coding part. Such an approach might help companies assign the best coders to more important tasks and hire less skilled employees in automated testing. This won’t work with Selenium, as deep knowledge of programming languages is still required to work with its tools on a professional level.

2. Selenium requires third-party software to carry out an image comparison

In order to carry out image comparison during testing, Selenium requires third-party software, unlike some other testing tools. A common choice remains Sikuli–an image-based recognition tool, compatible with Selenium.

Despite the abundance of Selenium video tutorials and forums, it's basically the community that provides constant technical support, not the developers themselves. Therefore, finding a solution to a very unconventional problem might take some time. In case the community can’t find a quick solution, you have to contact service companies, and thas is not free of charge. 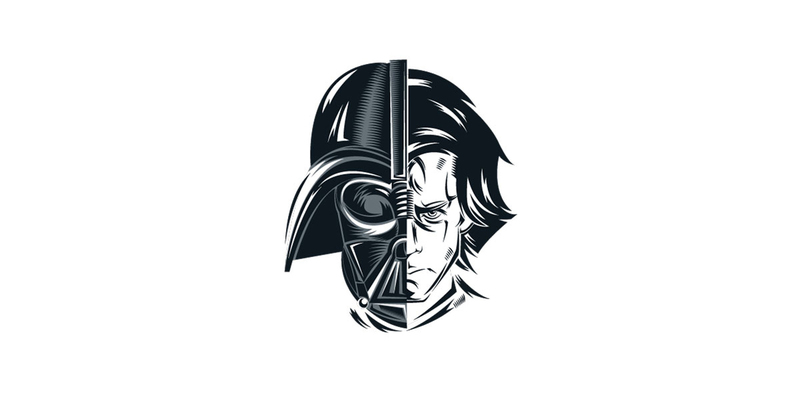 Selenium is open source, diverse and easy to handle. It saves you a lot of money on software purchasing and tech support, offers unlimited choices to testers from languages to the operating systems, and remains easy to handle. Selenium can automate the test process with just a basic set of instructions. As a result, despite several flows, Selenium still dominates the test automation market. We absolutely love Selenium and highly recommend this tool to other companies and startups.

We actively use it in our own projects as well, like in Famlicious, a family messenger app that provides a unique way of building family trees

At the same time, it's worth mentioning that, despite the growth of test automation services worldwide, humans are still the driving force behind testing as they maneuver testing tools and interpret scripts. Even though we are quickly transitioning into a more automated world, the so-called “human touch” will remain important in the software testing industry, at least for a couple decades.

AI in the Fintech Industry: How Both Companies and Clients Benefit

How to Create an App Like Yelp: What You Need to Know

Machine Learning in E-Commerce: The Future of Online Shopping