People like quizzes. They combine the fun of guessing with learning more about interesting topics. You can play them alone, with friends or even with a virtual assistant like Google or Siri. Who knows? You might learn something that will impress your friends or even a fact that could save your life!

Another exciting activity most people love is travel — visiting new places, seeing new cultures, and talking to new people. It improves your mood, enriches your knowledge, and broadens your mindset.

These days, as social distancing is enforced around the world, it’s hard to talk about actual travel (and we strongly advise you to stay home). Nevertheless, our team has found a way to mix the fun of quizzes and travel. Want to learn about new places or check your knowledge about popular tourist destinations? TravelTrivia will help with that!

What is Travel Trivia?

After StickerBox, TravelTrivia is our second effort at developing our own apps. It’s an iOS trivia game where you answer fun questions about traveling and tourism. It has ten difficulty levels, two types of questions, hints, and additional lives to continue if you fail a level. 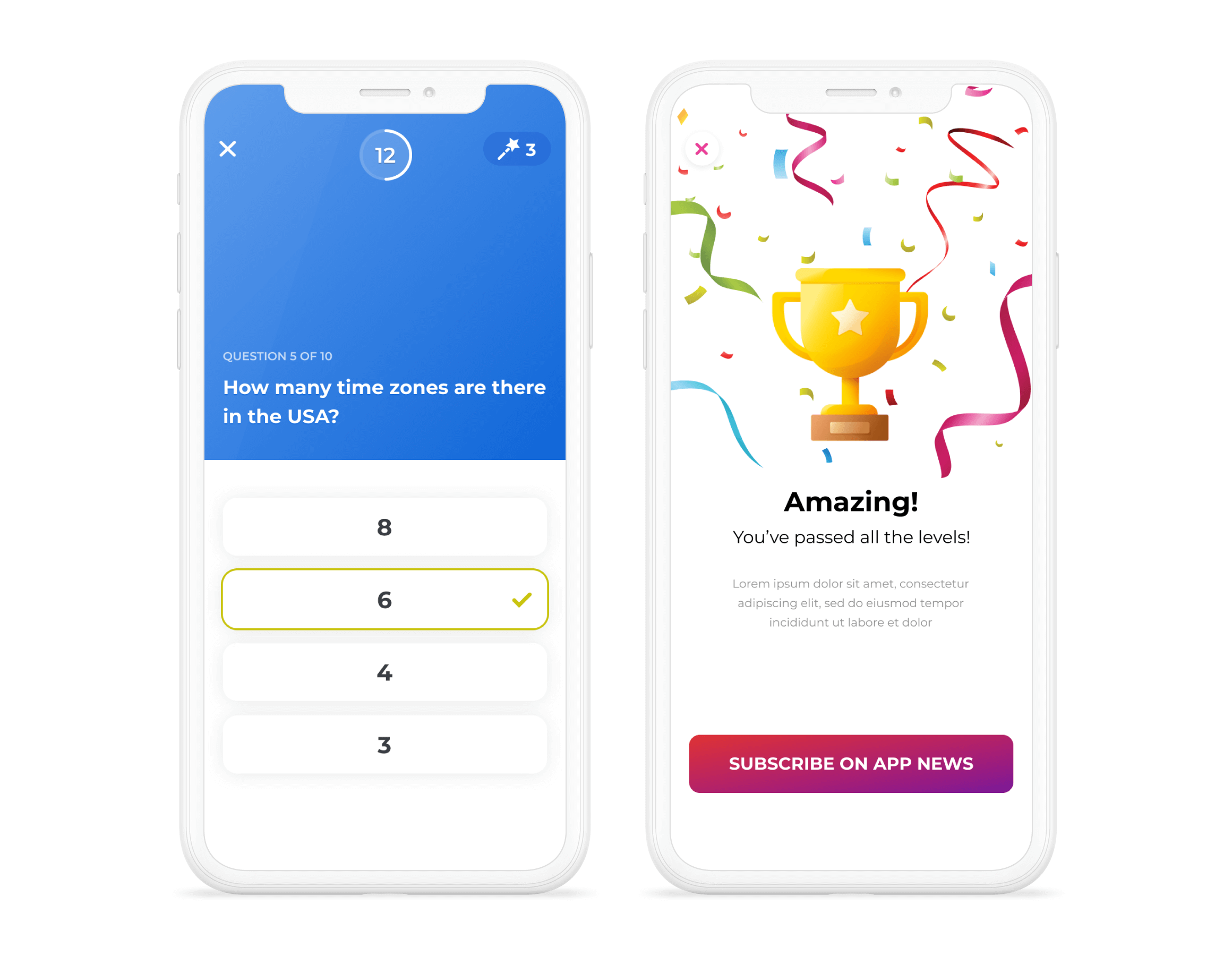 How this trivia game works

Because we were testing the idea of this type of game, we developed TravelTrivia as an MVP (minimum viable product) using a simple interface. A new user first sees a dashboard that displays all the game levels. They start at the first level and then go through the later ones. There are two types of questions: multiple choice and fill-in-the-blank ones that use drag-and-drop mechanics.

If a question seems too hard, the user can get a hint towards the correct answer. If all available hints are used up and the user fails in the middle of a level, they can use a life to continue that level or just start it over again.

The idea of making a trivia game about travel came to our team while we were working on another project. We wanted to start developing our own apps, so this project became a source of inspiration for us.

Our goal was to create a trivia game app with quizzes about countries, travel, and tourism. At the start, we envisioned building a huge app with vast functionality. The first build we considered included a lot: signing up, a dashboard, a user profile, 25 difficulty levels, result screens, and invites in the app. We also thought about having a function where users could earn special points to buy additional lives, hints or other perks of the game.

But the more we met, the more clearly we understood that our envisioned first build was way too complex and would take forever to create. We decided to build an MVP instead to test the idea, which meant we didn’t need to implement all those desired functions.

Working with our product manager, the team searched for ways to make the app less complicated. We tossed the in-app invites and decided to build five difficulty levels instead of the original 25 (we added five more in a recent update). Points earning was also cut, but the architecture we built allows us to add this functionality in future updates. Our initial version of the user profile was also revised and simplified.

Another item that wasn’t so important for the MVP was the admin panel, since the minimum set of functions could be easily controlled without it. Still, we decided to build it into the first version of TravelTrivia to make sure that if we decided to implement broader functionality, it would be easy to manage.

When development started, the process went gradually as we paid close attention to every detail in mechanics and animation. We wanted the app to work as flawlessly as possible. Our marketing team did a great job too! They created detailed charts for checking the product’s performance and efforts counting. This allows us to evaluate customer feedback and respond to it quickly. 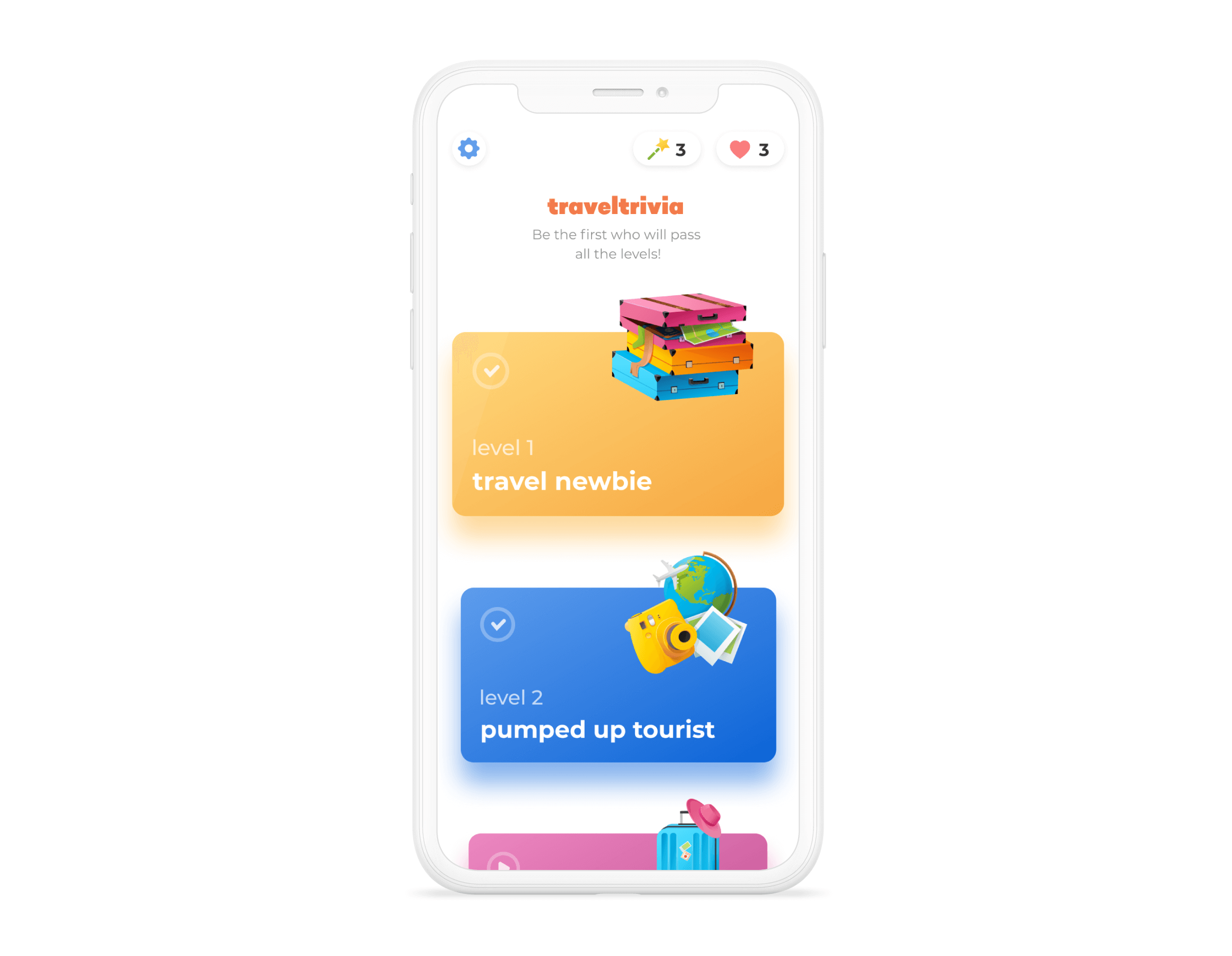 TravelTrivia was created by seven people:

The entire development process took six months, and the first version of TravelTrivia was launched on February 24, 2020. Our team spent most of that time working out the idea and building and reviewing prototypes, as we had our most lively debates about what the trivia game should look like. Only after the team had reviewed, tested, and agreed about all the prototypes, our designers started working on the main style and our developers began building the app architecture.

We tried some new technologies for this project, so the main technology stack includes:

Most of the development process went smoothly with just a few minor challenges that were quickly resolved. The main challenge we faced was Twilio SMS authentication with Belarusian phone numbers. The problem mostly concerned local mobile services operators, but it could also occur with phone numbers in other countries. We implemented another authentication method — Sign in with Apple — but Apple Team said it's not an essential part of the app. So to make our trivia game even simpler for new users, we removed authentication altogether.

The main monetization method for TravelTrivia is in-app purchases of lives and hints. Now our team has also implemented and released a subscription model.

The first release version of TravelTrivia aligned with our plans. The team united to achieve the best possible results, using all their experience from our previous projects, and the final result satisfied everyone. The app was made scalable enough that future updates could be easily deployed.

We also finished and released a subscription model and pricing for in-game purchases. Moreover, we continue to update the content of the levels, so there’s always something new to learn about our world.

Currently, we are working to optimize that content after seeing that some users were having difficulty completing the tasks we prepared for them.

Even if we can’t travel much these days, we still can learn more about interesting places around the world. TravelTrivia makes this easy with its fun and engaging quizzes.

The world is waiting for you!

If you have questions, feel free to contact us!