However, not everyone is as informed about software development as others. For example, you can be a fashion designer who decided to create a mobile app to reach more customers, but who never worked with building any type of software from scratch before. In this case, the terms “frontend development” and “mobile app backend development” can be a bit confusing at first sight.

In this article, we are going to talk about frontend app development and backend development, their differences, and what full-stack development means.

What is Frontend App Development?

Let’s start with mobile app frontend development. Frontend, also known as “client-side,” is the part of a mobile app, website, or desktop software that the client interacts with directly. It includes all the visual design elements like layout, colors, text fonts, images, and videos, as well as content, interactive elements (buttons, drop-down menus), and navigation. The purpose of the frontend development is to create an eye-pleasing and easily understandable interface that will help users achieve their goals in the app. 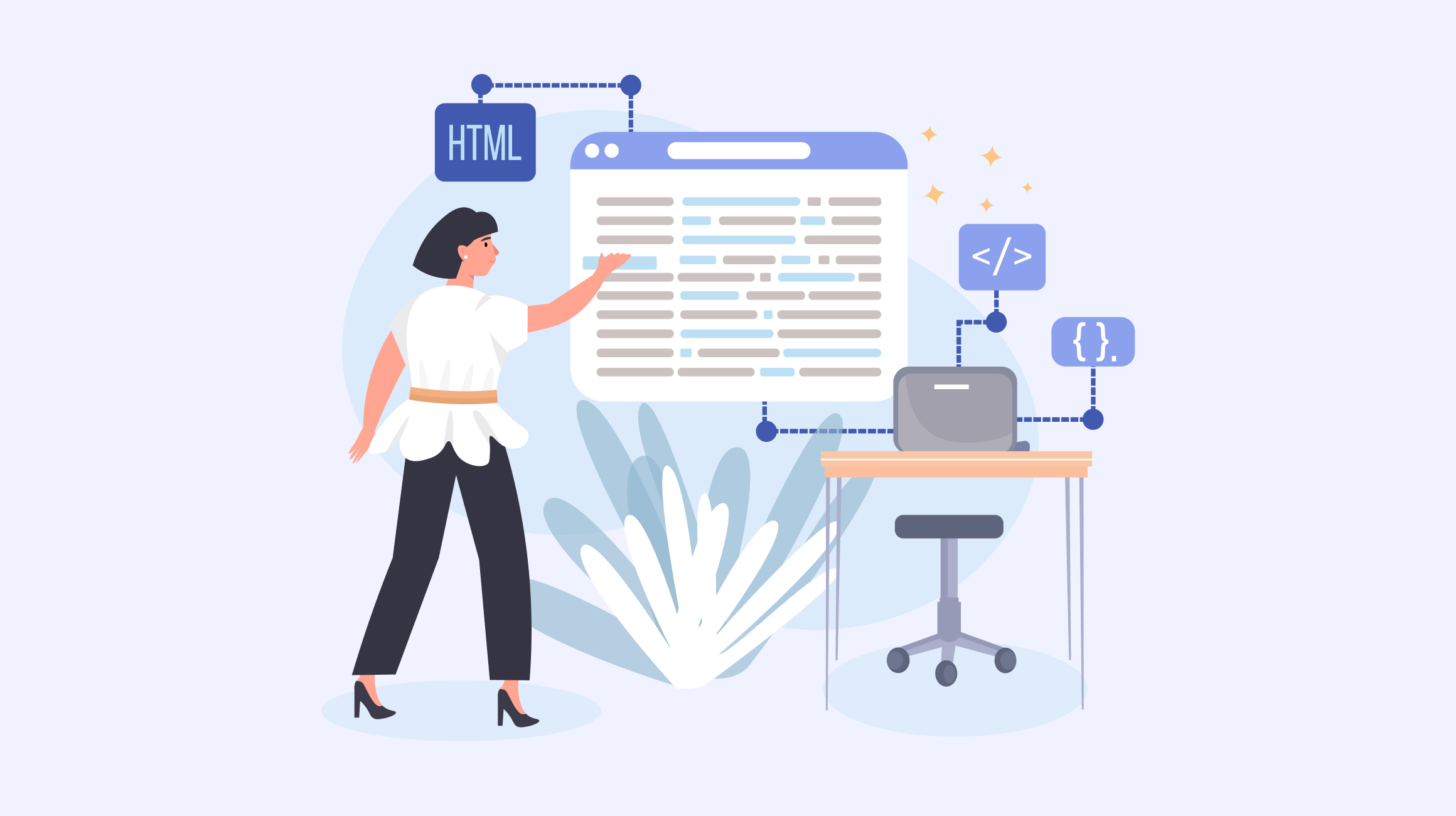 Besides paying close attention to details, frontend engineers should bear in mind two core metrics: performance and responsiveness. The performance will show how fast your app is loaded and what resources it takes to function properly (the fewer the better). Responsiveness means the correct displaying of elements on all types and sizes of screens.

Frontend engineers work closely with UI/UX designers to provide the best experience possible. Our latest article covers web development trends for 2023 that will help you create it.

For iOS development, engineers use Swift and Objective-C. These two programming languages were created by Apple specifically for iOS, macOS, and other operating systems used by Apple devices. Swift is significantly younger since it was created in 2014, while Objective-C was released in 1983. iOS has a limited number of screens and devices, which makes the frontend development a bit easier, but it still requires attention and expertise.

For Android, the main language used by developers is Kotlin. Google switched to Kotlin in 2017 and has preferred this language since then. Kotlin has a concise syntax and a sufficient set of libraries.

Android frontend development can be quite hard due to all the different types of devices based on this operating system, but talented developers can create a beautiful solution that will work almost flawlessly everywhere.

You can also create a cross-platform app that will work with one codebase and all platforms. If you wonder how to calculate the cost of app development, make sure to check our guide.

There is a particular set of technologies that frontend developers commonly use to create the app’s client side. It includes programming languages like HTML, CSS, and JavaScript. 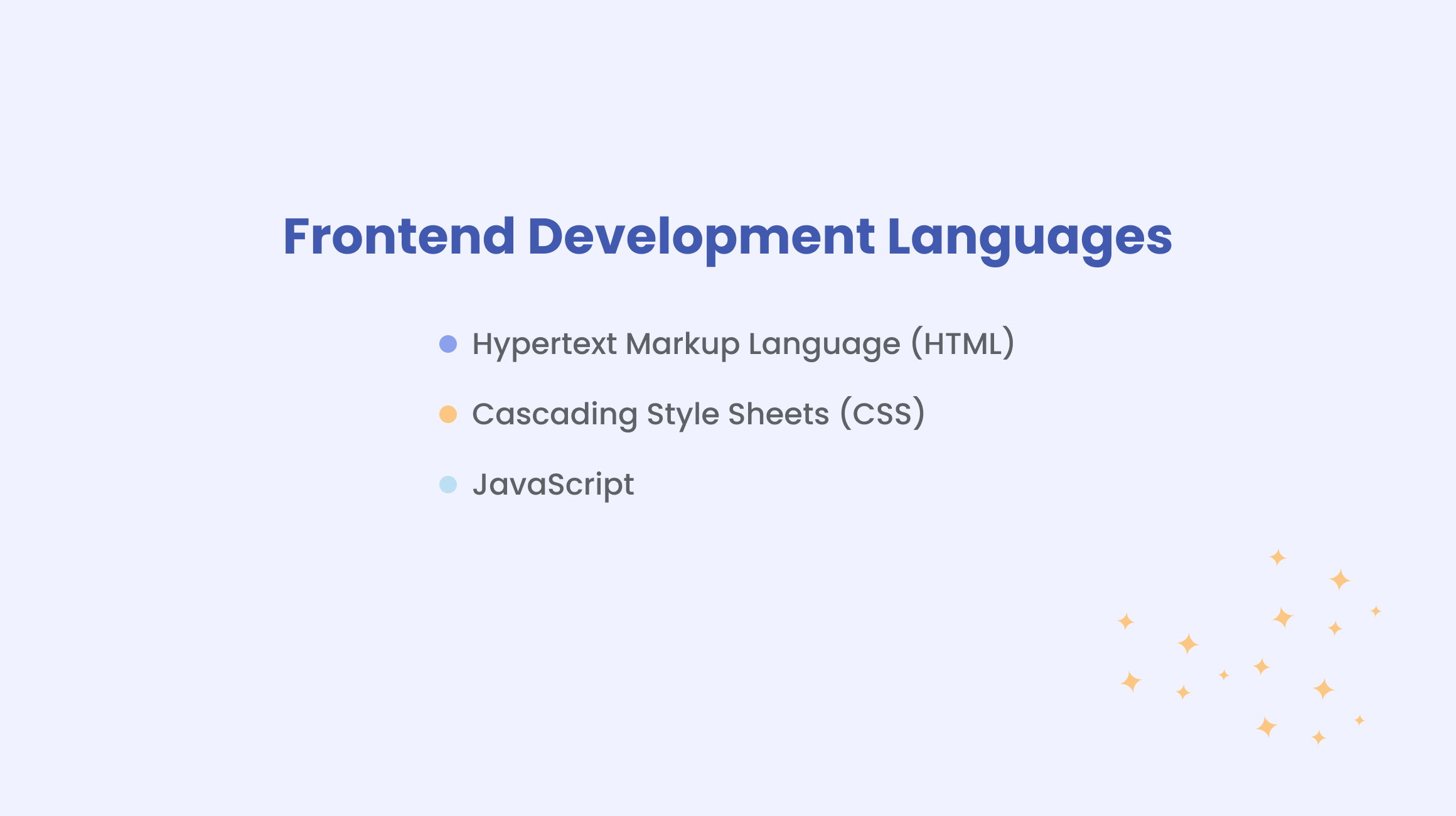 Hypertext Markup Language, commonly known by its abbreviation, HTML, is a markup language that structures the content of a web page. Hypertext here refers to interactive links between pages and markup is responsible for organizing the content with the help of tags. As a result, we get a structured page or user interfaces with correctly placed text, images, and videos.

The most recent version of HTML is HTML5 which was released in 2014. There are still debates about whether HTML6 will come out or not, but for now, we are working on frontend development with what we have.

Cascading Style Sheets (CSS) is a programming language for frontend development that optimizes the layout implementation. CSS allows frontend developers to introduce styles and formats to the page’s content to get an eye-pleasing web page and web applications. This approach to styles has one big advantage: CSS works with formatting separately from HTML. You can implement styles with HTML itself, but there is a high chance you will mess up the code. CSS eliminates this risk.

Also, when you change a CSS style sheet, the changes appear at all places where this style is used, so you don’t need to go through every page and synchronize them.

JavaScript (JS for short) is one of the most popular languages for frontend development. It’s an event-based language that is used by frontend developers to create scripts for interactive elements on web pages. There are also several widely used JS-based frameworks that provide developers with development libraries and tools:

Other technologies include TypeScript, jQuery, and Elm.

Now that we’ve covered the topic of the frontend itself and frontend development technologies, let’s dive deeper inside the app’s structure and talk about backend development.

Backend, or “server-side,” is the part of a website or mobile app that is hidden from users. It’s responsible for collecting and storing the data as well as pulling the relevant data upon request. Backend development also handles business logic and manages behind-the-scenes operations like monetary transactions or providing data security. 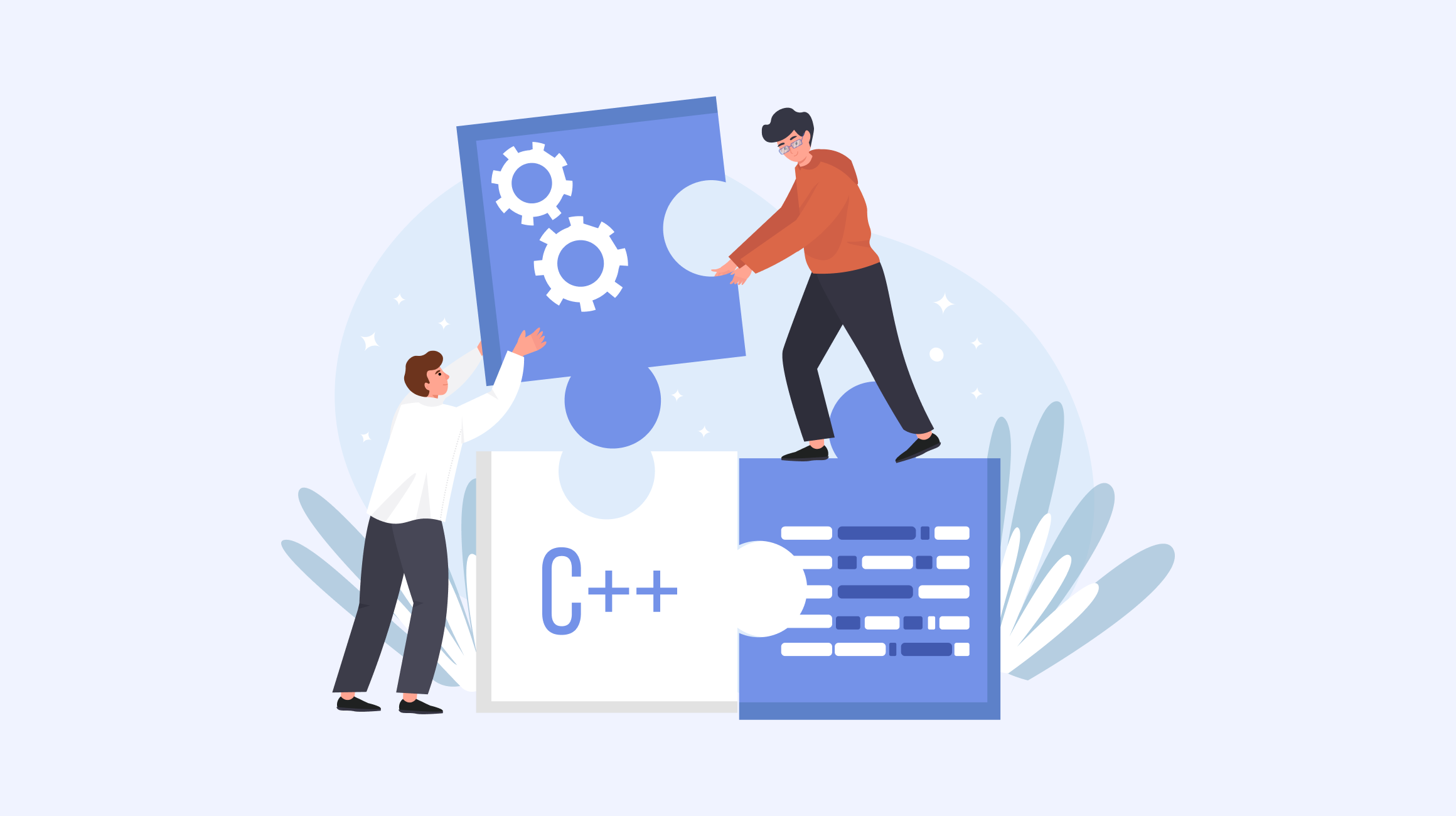 For example, when you go to an e-commerce app, create a profile, and start browsing goods, the information you entered and the history of visited items will be stored in a backend database. Also, when you fill your shopping cart and click “Buy,” the backend will complete the transaction without you seeing any details of the process.

We already know the most popular tech options for the frontend, so now it’s time to learn more about the tech stack for backend development specialists. The most common tools that they use are: 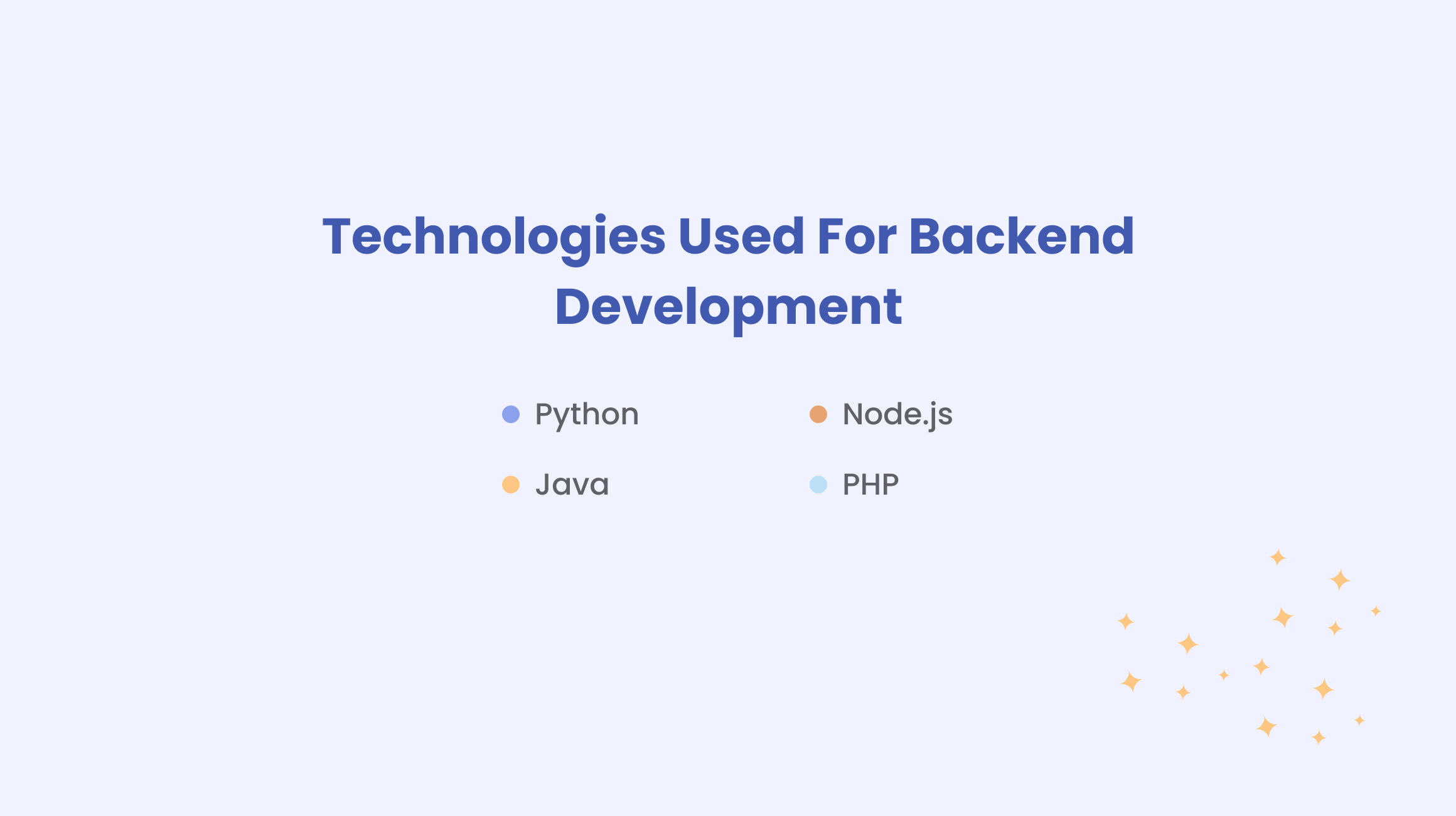 Other languages include Ruby, C#, Go, and Erlang.

Frontend vs Backend Mobile App Development: Why Not Both?

Technically, your mobile app will need both parts, backend and frontend. We have already discussed the main difference between frontend and backend development, so now, we will talk about more details that distinguish these two parts.

The most obvious difference here is the tech stack that developers have to learn. Frontend engineers learn HTML, CSS, and JavaScript, and backend engineers work with Python, Java, and other backend technologies. Also, frontend developers should know how to work with client-side parts like design, interactive elements, and performance. Backend specialists are required to understand under-the-hood processes like servers and databases.

The salary difference between these two specialists is not that noticeable: According to Glassdoor, a median annual salary of a US frontend developer falls around $102,635, while a US backend developer will earn approximately $118,925 a year. 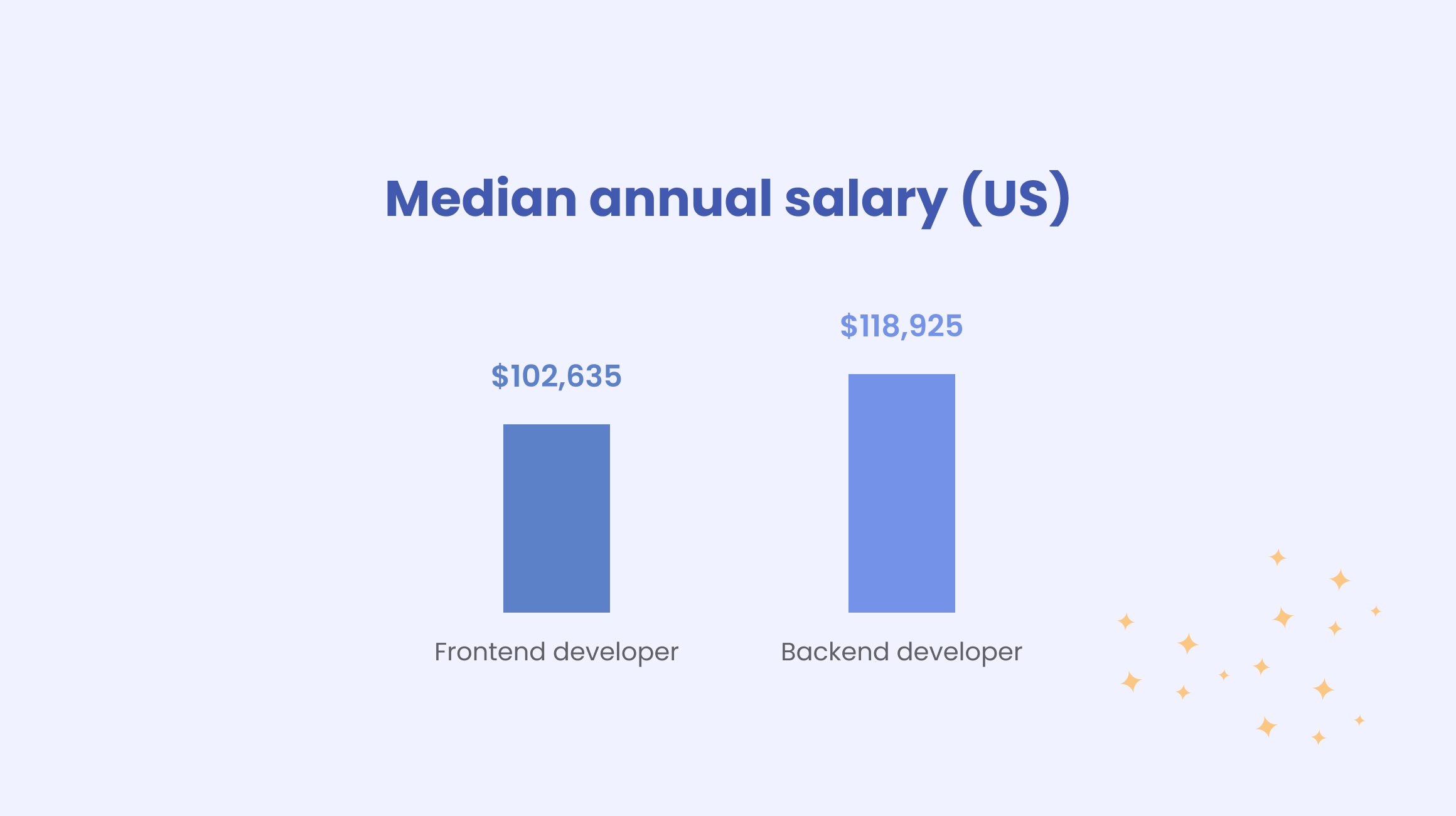 Frontend vs backend: Are they that different?

Even though the two parts of a mobile app serve different purposes, they have one common goal: They work together to create a functional and eye-pleasing solution that will solve users’ pain points.

Besides, one person can work on both parts at the same time. Such specialists are called full-stack developers.

What Is Full-Stack Development?

This type of development refers to a combination of frontend mobile app development and backend development. The developer works with both sets of features and tech stacks to create a mobile app. Being a full-stack engineer requires skills of both roles which makes such specialists flexible and extremely valuable for the team. Thanks to their deep knowledge, full-stack engineers can solve specific issues and see the entire perspective.

However, putting the responsibility of backend and frontend development on one person is not the most practical decision. It can lead to burnouts and missed deadlines. If you want to employ a full-stack developer, their main focus should be directed to one of the app’s parts.

We have explained both aspects of software development, their core differences, and the technologies used to complete the solution. Now, you will be more aware of what your development team is talking about and why they advise you on certain team composition. To sum it up, mobile app frontend development means building an interface for users, and backend development means creating an under-the-hood infrastructure.

If you need assistance in frontend and backend development, as well as full-stack development, feel free to contact us. We will reach out to you and provide you with an estimate of your project.

📱 What is frontend mobile app development?

Frontend development refers to a process of building the app’s client-side, a part of a mobile app, website, or desktop software that the client interacts with directly. It includes elements like layout, colors, text fonts, images, videos, content, interactive elements (buttons, drop-down menus), and navigation.

📱 What is backend development?

Backend development is the process of creating a software server-side that is hidden from users. Backend is responsible for collecting and storing the data as well as pulling the relevant data upon request. It also handles business logic and manages behind-the-scenes operations like monetary transactions or providing data security.

📱 What is full-stack development?

Full-stack development refers to a combination of building both backend and frontend app needs. The developer works with both sets of features and tech stacks to create a mobile app. front end app

📱 How much does frontend development cost?

The cost of frontend development will vary depending on your project’s scale, team composition, and deadlines. Feel free to contact us to get a detailed estimate.