Today, real-time communication is so common that some of us hardly notice it. Everyone is used to video and audio calls; it’s a regular part of our daily life, especially now when most of us are trying to stay in as much as possible.

To make your app transmit video and audio in real-time, you can opt for WebRTC mobile app development, and we review this technology below.

What does WebRTC stand for?

WebRTC, or Web Real-Time Communication, is a free open-source project that provides APIs for enabling communication between users via web browsers and mobile applications.

The need for video conferencing and online communication has been around for a long time, even before WebRTC came up on the market. The two most popular ways to implement this were either by using Flash or installing a separate app developed only for calls. These methods are useful and effective, but first, users have to install additional software, and second, companies that want to enable real-time communication have to deal with intricate tech stack and protocols.

In 1999, the Swedish company Global IP Solutions (GIPS) introduced the first version of a WebRTC-like technology to eliminate the redundant actions in this process. The company built a lot of components for RTC, such as codecs and echo cancellation techniques. However, despite the technology’s advantages, it didn’t get a lot of recognition in its early years.

GIPS was acquired by Google in 2010, and the company then started working on a unified standard for WebRTC. The next year Google made it open-source, giving businesses the ability to use and adapt WebRTC for their needs.

Ten years later, WebRTC is everywhere. Nowadays WebRTC is a common standard for streaming video, audio, and data that are managed by:

A lot of companies, including Facebook and Amazon, adopted this technology, and many smaller businesses followed suit. The popularity of WebRTC is still steadily growing. Let us guide you through the peculiarities of this solution and explain what it can bring to your project.

We are ready to help you enable real-time communication.

How does it work?

The main focus of WebRTC is to enable in-browser, peer-to-peer, real-time audio and video communication between remote participants. Below we describe the complete flow of how WebTRC is organized.

There are three main parts to real-time communication: signaling, media, and data.

Signaling is not an actual part of WebRTC, but it plays a significant part in establishing the connection between peers. It deals with web sockets and HTTPS protocols and is written in JavaScript.

Signaling starts with each participant setting their own IP addresses. Then, data channels are dynamically created to identify other participants and support the negotiation process. Signaling creates a secure space that can be accessed only by authorized participants.

When at least two participants join the same channel, they are now able to communicate with each other. If we take a closer look at the process, we’ll see that in fact, the first participant extends a kind of “offer” through signaling protocols (such as SIP and SDP). Then, they wait for the “answer” from anyone on the same channel.

The second and the most important part of WebRTC is media. WebRTC works directly with audio and video that are distributed through separate media channels. It uses different routes than signaling and behaves in a different way.

Audio and video in WebRTC work with the help of WebRTC codecs—the algorithms that compress and decompress media data. The amount of possible codecs is immense, some of them being:

Additionally, WebRTC has been designed with low latency in mind: if you don’t lose any packaged piece of data due to a network problem, there is no need to retransmit anything.

WebRTC uses VoIP for media processing, handling this task with SRTP. SRTP, or Secure Real-Time Transport Protocol, is built on top of RTP as a secure transport protocol for real-time media. It provides integrity and security in WebRTC so that no unauthorized person can get access to the media sent. WebRTC uses a modified version of SRTP, so if you have your VoIP already deployed, it may be hard for them to cooperate.

The third part of real-time communication is data. In WebRTC, additional data is sent between participants via a special data channel. It uses the SCTP transfer protocol for sending data, but Google plans to try QUIC as a substitute protocol for SCTP. The data channel is used when you want to send direct messages between browsers without going through any server.

All these processes are handled by three groups of WebRTC APIs:

The first one is responsible for giving the user access to the camera, microphone, and screen. PeerConnection is basically the core of WebRTC, controlling the majority of tasks it performs: audio and video encoding/decoding in real-time, sending and receiving media over the network, and mitigating network issues.

In a nutshell, the entire process looks like this: 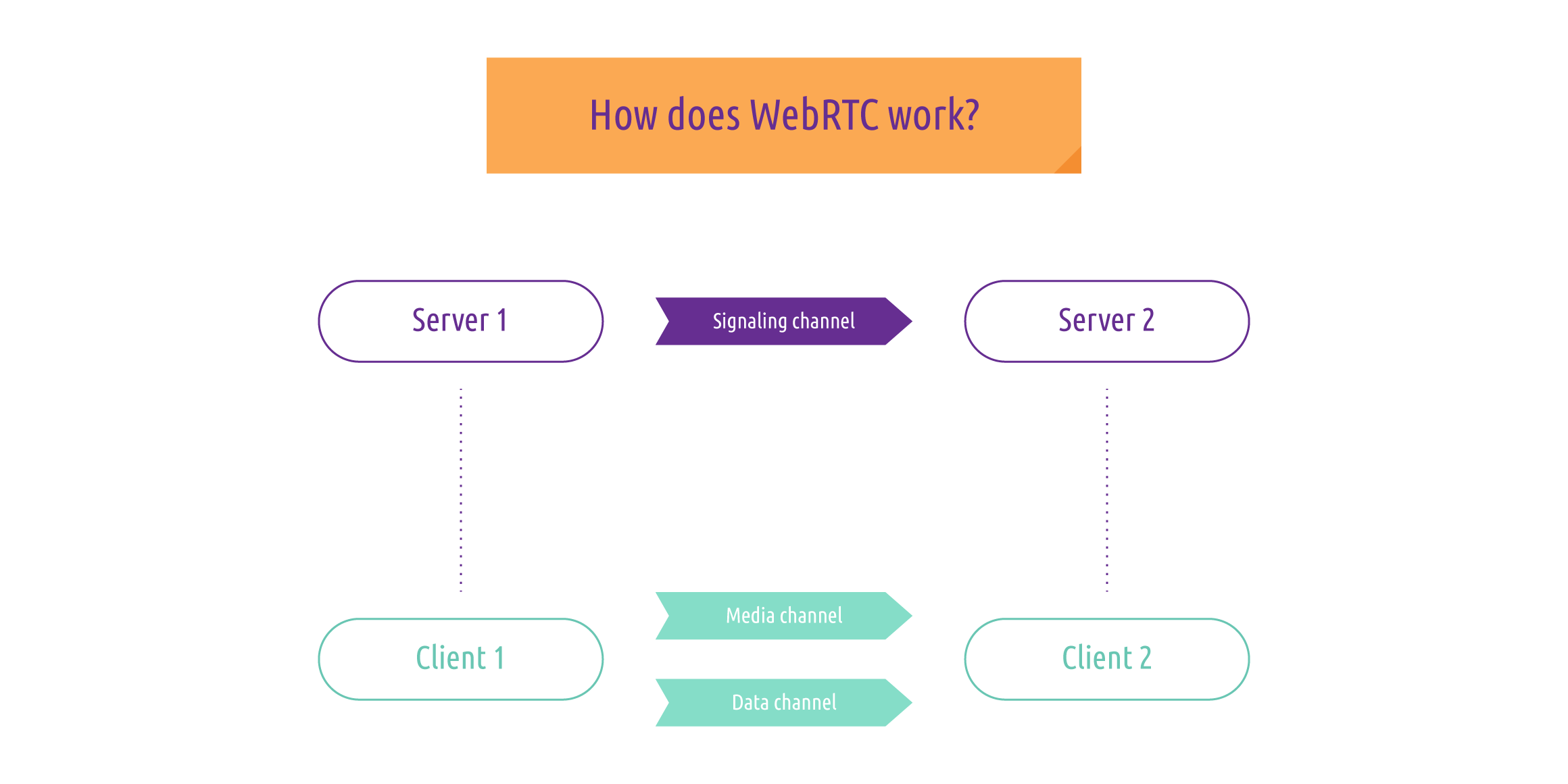 Why your project needs it

Today, WebRTC can still be called a new technology, yet it is already a decent competitor to classic telephony. As soon as it applies more common standards and updates some features, WebRTC can put a lot more pressure on the market.

Now, let’s get down to the reasons why WebRTC makes the standard telephony less effective and why businesses based on real-time communication love the technology.

With its WebRTC, Google aims to provide a standard real-time media engine compatible with all existing browsers. Developers and businesses can use it as they wish with no license fees.

This benefit also stems from WebRTC being open-source. Google wants to enable seamless real-time communication between all consumer platforms, so WebRTC is supported by the latest updates of the following browsers on PC, iOS, and Android:

What is even more efficient in WebRTC than in other real-time communication solutions is that there is no need for users to install any additional software on their devices—a browser would be enough.

This feature gives WebRTC an advantage over standard telephony. WebRTC can automatically adjust ongoing communication to the network conditions. This results in efficient use of bandwidth, delivering the best possible voice and video quality. The APIs and signaling can separately establish the size and format of each endpoint.

WebRTC uses voice and video encryption and authentication by default thanks to the abovementioned SRTP. Compared to Flash, which dominated the market of real-time communication solutions earlier, WebRTC shows more resistance to external attacks. It prevents eavesdropping and recording of voice and video, which is especially beneficial for connections over public WiFi networks.

Thanks to the open-source WebRTC code, your development team will enjoy a streamlined development process, which reduces the costs of the application implementation. Additionally, there is no need for in-depth knowledge of WebRTC because the technology has a standardized stack of APIs.

Among the benefits of WebRTC is also the fact that, particularly due to the adjustable built-in microphone settings, this technology provides better sound quality than Flash. Also, thanks to the previously mentioned audio and video codecs, such as VP8 or Opus, WebRTC can produce high-fidelity voice and high-resolution video. These built-in codecs ensure interoperability and avoid the need for codec downloads that may contain malicious code.

How to develop WebRTC application

One of the most noticeable WebRTC features that makes it so attractive especially for enterprises is the fact that it’s allowed for commercial use. Still, despite free source code, WebRTC technology requires both front-end and back-end teams to develop both sides of the app.

You also need a computer that has a web camera. If your device doesn’t have one, be sure to get yourself a USB camera that can be attached to the monitor. And of course, you need more than one person to test remote connections.

WebRTC doesn’t require any client-side software, yet still needs some tools and dependencies to aid your development team. They may include:

Also, mobile platforms do not support WebRTC on their own, so to implement a mobile WebRTC solution you will need some third-party tools like:

Best use cases of WebRTC (with examples)

Even though WebRTC is relatively young, it has already gained many real-life applications. We mentioned Facebook, Amazon, and Google itself as companies that successfully adopted WebRTC in software development. Here are some more use cases where this solution can bring value:

To sum it up

When developing a real-time communication app, WebRTC is a must for your project. This service is highly competitive with other solutions while at the same time providing additional benefits for both users and businesses. It makes audio and video calls secure and of high quality. This is what makes WebRTC so efficient and future-proof.

Integrate WebRTC into your app with Yellow.

How to Create an Instant Messaging App: Beginner’s Guide

Web Real-Time Communication (webRTC) is a free open-source project that provides APIs for enabling communication between users via web browsers and mobile applications.

💻 How does WebRTC work?

💻 Why is WebRTC useful for my app?

WebRTC is free, fast, and secure. It provides you with cross-platform compatibility, adjustment to network conditions, and high-quality audio and video.

💻 What industries can benefit from WebRTC?