When you start a new marketing campaign for your mobile app, it’s good to have a marketing specialist (or a whole marketing team) who can explain to you everything that is going on with your app. They will tell you if the audience likes your app or if the advertisement works well.

For running advertisement campaigns, marketing specialists use a lot of advertising platforms that help them organize and control all the ongoing advertisements. One of the most popular ones is Facebook Business Manager which is responsible for Facebook, Instagram, and WhatsApp advertising.

However, imagine a situation in which you have a team without anyone knowledgeable about marketing. What can you do if you don’t have your own marketing experience and want to look at the advertisement results yourself? Here is our FULL guide on how to use Facebook Ads Manager if you don’t have a marketing specialist.

How to view your ads in Facebook Business Manager

It’s as easy as one-two-three: Go directly to the Facebook Business Manager page and choose your app’s ads manager from all the Ad Accounts you have.

Note: It’s good to have separate Ad Accounts for each app, so all the reports and campaigns are easier to track.

The easiest part is finished: You are in the ads manager. This is what it looks like: 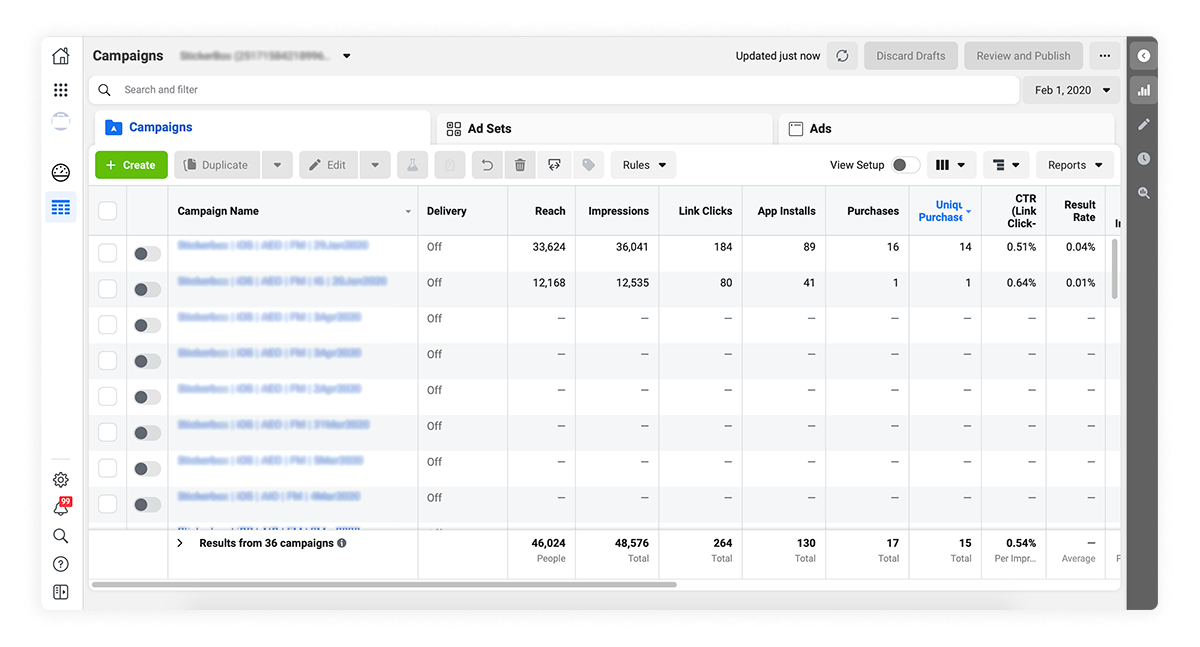 The pages are listed in the following hierarchy:

Other important sections on this page include:

How do you know if you should build what you’re looking to build?

The most important part of Facebook ads that will help you monitor changes and compare your ad campaigns is the columns menu. This drop-down menu helps you choose the most significant variables for checking and comparing the effectiveness of your ads. 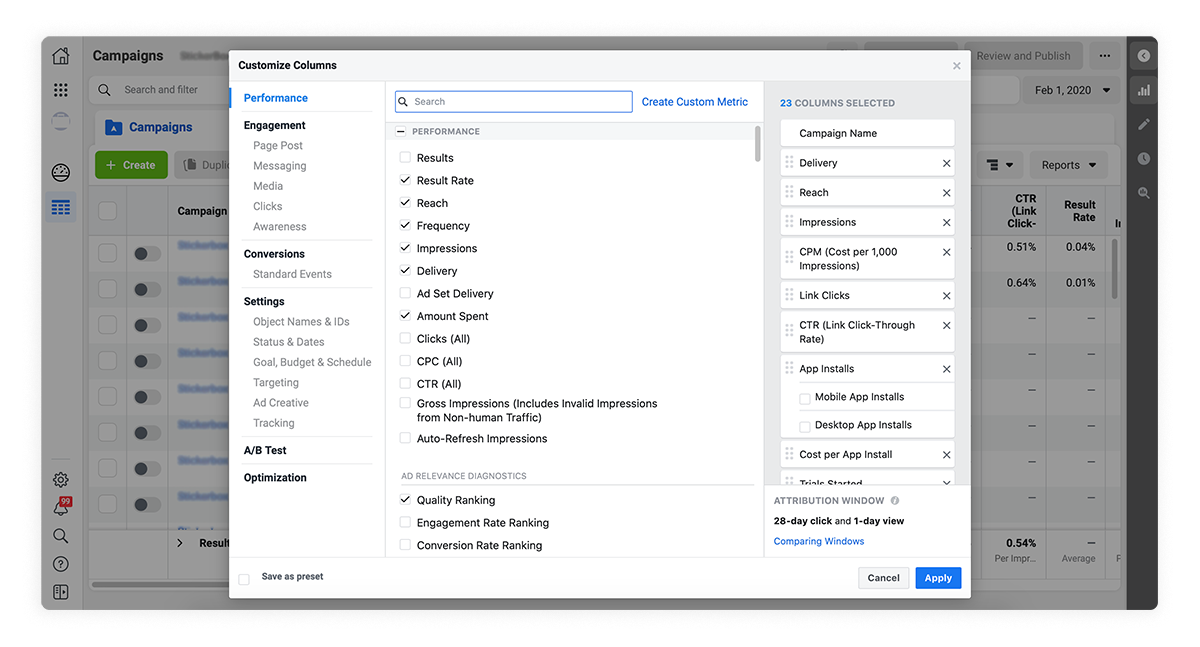 Here you can create a custom preset of columns. The default list of measurements won’t help you much since all the characteristics are placed inconveniently, so it’s good to customize the list. The best configuration of parameters for the ads focused on installs looks like this: 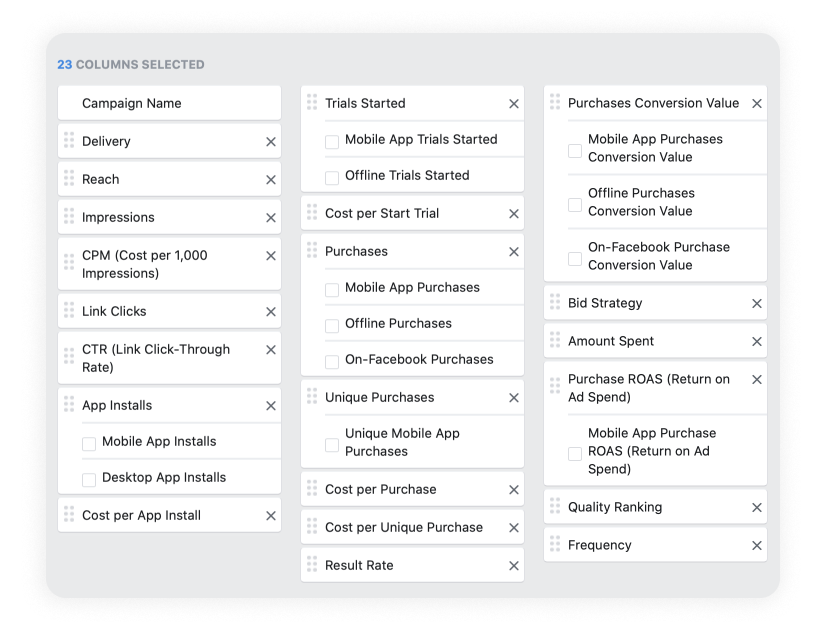 Note: All the checkboxes should be unchecked!

This way, all the indexes are ordered according to the sales funnel, so it’s easier to follow consumer behavior and then adjust your advertising campaigns.

What do all of these characteristics mean? We’ll explain them to you right away!

Reach and Impressions: These two notions are strongly connected with each other. Impressions show all the times your advertisement was shown to the audience, including multiple shows to one user. Reach shows all the unique impressions of your ads. Basically, reach is the number of people who have seen your ads at least once.

The more unique views you have, the more the total number of impressions will be.

The next index is CPM, or cost per 1,000 impressions. This metric stays at the beginning of the sales funnel and can be used to have a quick metric of the ad or campaign’s success. If CPM is high, then all the other indicators will be high too. If CPM is falling, all the other cost-related metrics will be falling in direct proportion. Therefore, this is the first thing we look at.

There are a lot of things that influence CPM, for example, the region. Usually, in the US, CPM is three to five times higher than in Asia. Another important factor is the level of competition: If a lot of similar advertisements are shown to one audience, then the rates will increase.

The most important indicator of a separate ad’s performance is СTR, or click-through rate. It shows how many people actually clicked on your ad and got to your app’s page. On average, good CTR is considered to be higher than 1%. Sometimes the average rates can be different, for example, if you optimize ads for in-app purchases, then the norm is 0.8%. In any case, if CTR is below normal, the ads are ineffective and need revising.

After the click-through, the person will arrive at a page in the store, allowing you to view the Install Rate — the ratio of the app’s installs to the clicks on the ad. A healthy percentage for the Install Rate is around 40%. There are several reasons for Install Rate to go below the norm, and the most commonplace of them are:

How to make your App Store page look great

If either of these two reasons is the cause for a low Install Rate, it’s time for you to revise the entire funnel, from a single ad to your app’s store page.

Trials show all the started trials in your app, and Purchases show the number of trials that continued into subscriptions. If your app doesn’t have a trial stage, then you can go directly to Purchases and uncheck the Trials category. Just as Reach shows unique views from Impressions, Unique Purchases shows how many unique users bought the subscription. And well, Cost per Purchase speaks for itself. Every project has its own economy and requirements, so it’s hard to talk about particular norms for these metrics.

Advertising on Facebook is optimized for a specific action, so Result Rate is the ratio of the target action to the number of impressions. For installs, Facebook tries to drive the cheapest installs, but it doesn't care what a person does after an install. If ads are optimized for trials, Facebook attracts those people who will install a trial cheaply, but it doesn't look at purchases.

Purchases Conversion Value (PCV) shows how much money a particular advertising company has brought to your company. It doesn’t take into account, for example, the App Store fee, so it’s difficult to judge the current financial position with its help. Return on Ad Spend (ROAS) is the ratio of PCV to the ad budget.

A bid is how much you're willing to pay for a specific action. If you use an automatic bid, this category is not necessary, but it will be useful for manual bidding.

Note: The manual bid is usually a bit overstated: If you are willing to pay $7 for trials, you put around $9.

Quality Ranking is the quality of advertising that Facebook determines by itself.

Frequency displays the number of impressions per person. If it's too high, it's time to change the ads since the audience burned out and the ad or campaign became ineffective.

It’s essential to evaluate the ads’ effectiveness at all stages, from the whole campaign and ad sets to separate ads. We hope our guide will help you manage the ads and campaigns.

If you've got any questions, just contact us and we'll be right there for you

How to Make Your App Store Page Look Great

How Omnichannel Customer Engagement Can Save Your Customer Service