Today, location-based apps have expanded beyond the level of a simple local discovery. From Uber to Instagram, from Tinder to Runtastic, they have changed millions of people's lives. Numerous industries continue to develop such apps in order to make their customers’ daily experiences more comfortable and amusing at the same time. In this article, we'll outline how to create a location-based app, the key features of geolocation applications, and the basic steps you may need to make a location app.

Finally, we will share the experience of our own location based apps…saving lives during the severe refugee crisis in Germany. Keep reading!

As the use of smartphones rapidly grows each year, thousands of new mobile apps appear on the market. By the end of 2017, the Apple App Store contained about 2 million apps, and Google Play featured 2.2 million apps.

Due to their particular usefulness, location-based services occupy an important niche in the mobile app market. As 77% of Americans now own smartphones, numerous industries have already benefited from location based service apps. In particular, location based apps remain highly in demand with retail, on-demand services, logistics, fitness, tourism, social media/dating, and even games! 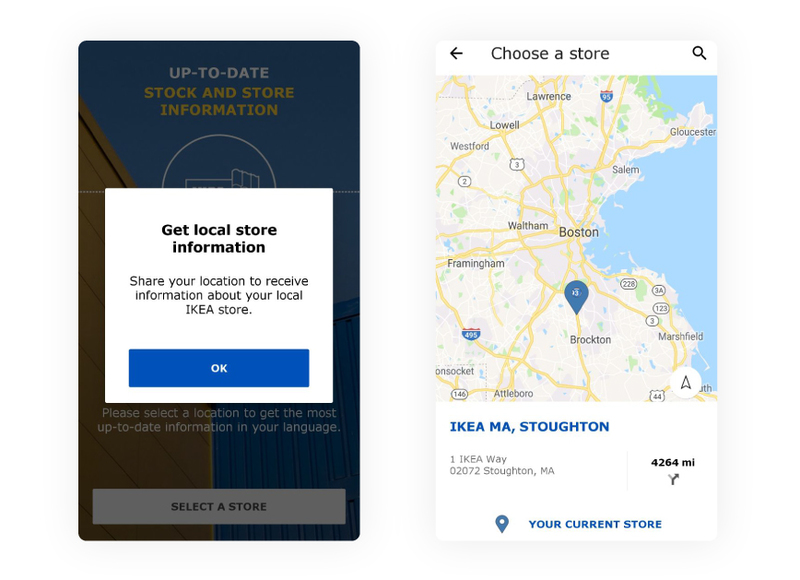 Giant retailers, such as IKEA, use geolocation applications to help their customers find the nearest store, choose a convenient delivery location, or navigate themselves inside the store

Apart from that, all kinds of delivery services, from local pizza to global players, such as DPD or UPS, also allow customers to track their orders all the way from preparation to delivery. Uber, which is among the most popular on-demand location-based apps, allows passengers to track and monitor the closest driver, as well as track a driver’s arrival and the whole duration of the journey in real time. Different logistics geolocation apps help their customers find carriers in their area. For example, Cargomatic connects shippers with nearby trucks in real time.

All sorts of travel location-based apps are designed to simplify travelers’ experiences, such as looking for nearby hotels/apartments (for example, Booking and Airbnb), getting around (Google Maps, TripAdvisor), shopping (CityMapper), and meeting fellow travelers (Couchsurfing, Travel Pal).

In case you run on a daily basis, you may want to download such location-based apps as Runtastic or Nike+. They not only map your routes but also track your speed and connect with fellow runners in your area.

Social media and dating apps continue introducing people to each other and pairing together millions of couples across the globe with the help of geolocation features. For example, Facebook, Instagram, and Snapchat enable you to use geo-tags on posts. Therefore, people may instantly connect based on their actual location. Dating apps, such as OK Cupid, use their participants’ current locations to arrange chats and meetings with local singles.

Finally, some famous games use geolocation features as well. Do you remember the mega-popular Pokémon GO? Certain gamers even chased their Pokemons in the weirdest places like cemeteries and government offices. This is a great example of an extremely powerful location-based app.

Look who came to our office the other day! :)

How does a geolocation application work? In general, geolocation is a technology for a mobile interface, which is available for every smartphone.

The Global Positioning System (GPS) is a network of about 30 operational satellites regularly orbiting the Earth. At present, anyone with a GPS device (either a smartphone or a handheld GPS unit) can receive radio signals from those satellites. At whatever location you are on the planet, at least four GPS satellites remain ‘visible’ and transmit regular signals about their position. The GPS chip from your smartphone intercepts those signals. Then, it calculates how far at least three of those satellites remain from your current location. Based on this information, your GPS chip provides the exact coordinates of your location in a process called ‘trilateration’.

Apart from GPS, a smartphone’s location can also be determined by several other means:

Therefore, the key features of every geolocation app include GPS coordinates, location tracking, and map integration.

Among the best examples of non-real time geolocation apps are CityMapper, Runtastic, MapsMe.

The most common examples of location services are the "Find My Friends" function via iPhone, Tinder, and Instagram.

Prior to creating a location-based app, we advise you to research the market, get a viable business idea, and define the type of your future app. Is it a ‘real-time’ or a ‘non-real-time’, a ‘map-based’ or a ‘location-based’ app? As soon as you are done with that, start with the following basic steps. Geolocation app development should obviously take some time, effort, and financial investments.

Step 1. Define the particular geolocation features for your app

They may include GPS coordinates, Google Maps or other map integration, and location detecting—depending on an app’s type.

Step 2. Select a technology stack for your app

Selecting the right technology stack—a set of tools used in the development of a software product like Google Maps SDK or Mapbox—requires some patience and professional advice. Yet, once you are done with that, you are halfway through.

Remember that a location-based app is still a mobile app, which has to contain a user-friendly interface and a protected backend database.

All of the best apps have some specific features in common; check out this article for the most important ones

As data protection laws become stricter worldwide, it's important to take into account the existing legal regulations in all of the countries your apps intend to target. After all, location-based apps are indeed to be very ‘data-heavy’ products; therefore, you need to protect the data of your customers.

A minimum viable product is an essential step in any app development process. It’s the first version of the product and contains only core functionality for real users to test. They will give you feedback about what to add and what to fix. Or, they may even say that your idea is not what they need right now. This result is also valuable since it saves you thousands of dollars you could have spent on app development.

When these steps are complete, you can release the full version and strat the maintenance work.

Create an app with geolocation today

Although thousands of new geolocation apps emerge each year, some of them remain unnoticed in the App Store, while others make tremendous business cases. Here, we provide 10 great examples of geolocation apps:

In the PokémonGo map, Pokéstops and Gyms are scattered around your city, and location based features in the app allow you to battle with other trainers and look for nearby Pokémons

At the same time, geolocation apps have become so widespread that you may not even notice that they are a part of your daily life. For example, Dropbox desktop application asks for location permission if you choose to enable background uploads for the camera uploads feature. 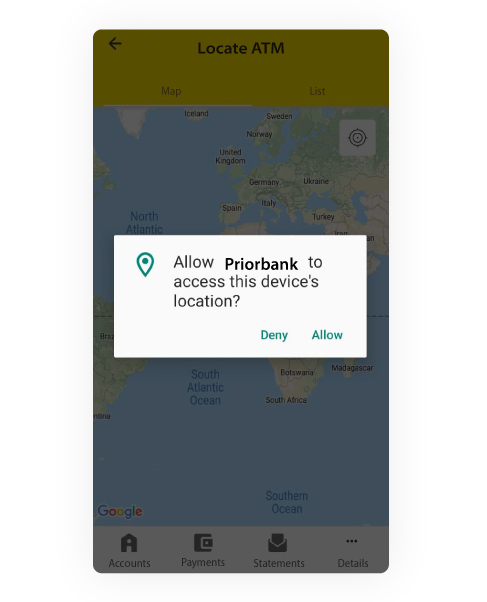 The cost of location-based app development

Keep in mind that engineering and testing the app will require certain financial investments. Here are more factors influencing the final costs:

Speakfree is a social communication tool, which helps you find people across different ranges (for instance, 1 km, 2 km, 10 km). In addition, with the help of Speakfree you may look for people speaking particular languages. For example, you may find Japanese speakers within 1 km from you in San Francisco.

Originally, Speakfree developed as a Munich-based startup in Germany. The app became popular in 2014, when the refugee crisis started in Munich. A number of humanitarian organizations used Speakfree to gather thousands of refugees in need of urgent help.

From a technical side, Speakfree has been made on a backendless technology, with Pubnub as a chat engine. The key challenges for developers included the moderation of pictures, public posts, and blocking users. 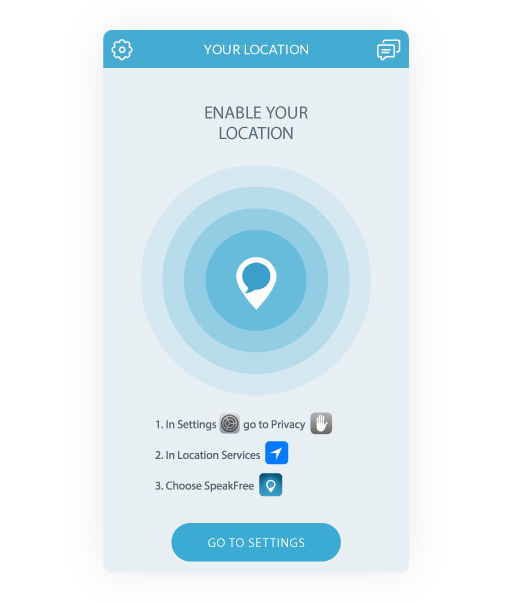 Racefully is a GPS activity tracker, as a project for distant running marathons, which is available for a download from App Store. Wherever you are around the world, Racefully tracks your running/walking/cycling/skiing performance in real time either on your own or in comparison with others. For example, Max from London and Alex from Tokyo decided to compete on who runs 2 km faster. Yet, their terrains are different: Max’s is flat, and Alex’s is more mountainous. The app takes into account the features of each terrain with the help of GPS and later provides a fair results’ comparison. 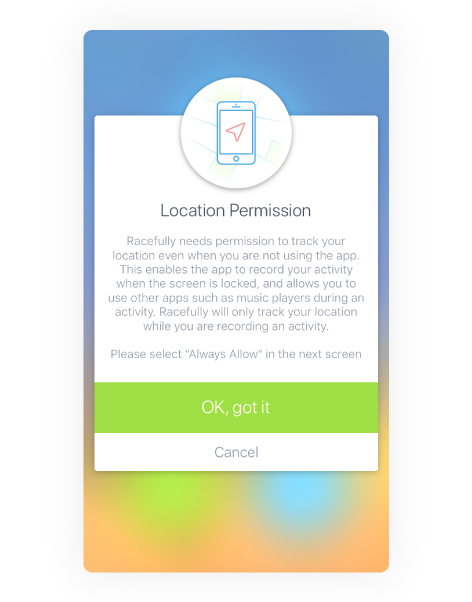 In conclusion, location based app development sounds like a smart idea. As more people use smartphones, the demand for various location-based services should grow as well. Perhaps you may uncover a niche market and eventually reach commercial success.

And we'll help you with that!

In case you decide to develop a location-based app, keep in mind the following basic steps: pop up with a viable business idea, think about particular geolocation features to add, take care of the user-friendly interface and data safety. In fact, location-based apps can be great fun and do amazingly good things for people!

Travel Application Development: Everything You Need to Know

🗺️ Why should I create a location-based application?

There are several reasons for you to opt for location-based services. Due to their particular usefulness, location-based apps occupy an important niche in the mobile app market; additionally, the number of mobile users is increasing. Services like food delivery and retail stores need location-based mobile apps to track orders and show the nearest offline points. Other popular industries that use location data are tourism, sports, social media, online dating, and games.

🗺️ How does geolocation work?

The Global Positioning System (GPS) is a network of about 30 operational satellites regularly orbiting the Earth. At present, anyone with a GPS device can receive radio signals from those satellites. Wherever you are on the planet, at least four GPS satellites remain ‘visible’ and transmit regular signals about their position. The GPS chip from your smartphone intercepts those signals. Then, it calculates how far at least three of those satellites remain from your current location. Based on this information, your GPS chip provides the exact coordinates of your location in a process called ‘trilateration.’

🗺️ What is the strategy for geolocation app development?

Define the particular geolocation features for your app, select a technology stack for your app, create a design and user interface, ensure data safety, create an MVP, release the full version, and maintain the app.

🗺️ What is the cost of location-based app development?