The recent technology trends vary widely. Some people are still wondering how to build an app like Clubhouse and some are moving on to more future-proof trends like AR. Augmented reality may not be as widely spread as virtual reality, but it’s certainly a rising trend in the realm of technology. In recent years, industries in several sectors have adopted augmented reality as the means to achieve their goals. We're sure you've already seen or used an app that enhances the real world with interactive, digital elements. That's bound to continue with increasing speed because augmented reality applications enhance the potential for audience engagement.

In this article, we are going to talk about the most crucial aspects of AR development like its benefits for your business, the potential drawback that you may face, the tech stack, and costs.

What is Augmented Reality, and How Does It Work?

AR app development, as one would naturally expect, is a matter of detail. To do it correctly—to use the technology to reach the user in a way nothing else can—is to cover all the specifics and contingencies. First, though, let’s talk about the term "AR" and what it really means. Augmented reality is the technology used to superimpose virtual objects over the real world in real-time. In other words, augmented reality combines the physical and virtual realms in a way that's transparent to the user. Seeing is believing, as the saying goes, and nowhere is it truer than in the world of AR.

Augmented reality requires the use of technical systems, including a camera and dedicated software that analyzes the given space and places digital objects within it. So, generally, the process is as follows:

You may have a fundamental question: How does AR differ from VR? The answer is simple: Augmented reality places digital objects within the image of an actual environment. Virtual reality (VR), however, creates a digital environment and brings you there by means of a device such as VR glasses.

The following statistics from trusted sources demonstrate the growing popularity and influence of augmented reality: 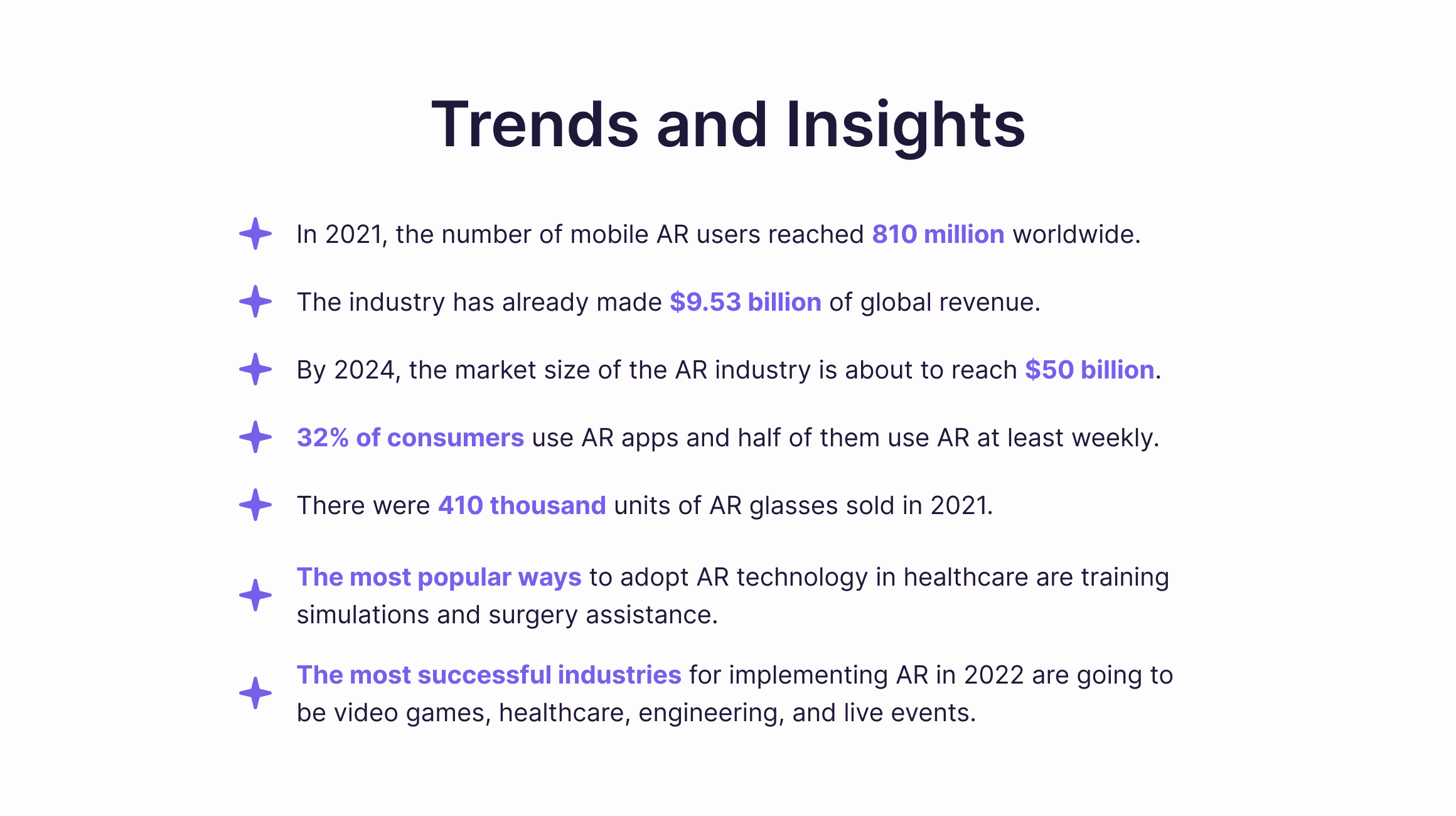 Those remarkable statistics indicated that augmented reality has become widespread in certain business areas. Let's look at the most successful AR market players and see what they offer.

Most industries continue to explore the potential of AR technology, but some applications have earned the trust of users around the world:

Obviously, this app is dedicated to home decor and interior design. IKEA Place lets the user choose a piece of furniture or a decor element (the app has more than 2,000 items) and virtually place it in the prospective room. The user can also move the object around and change its size to maintain its scale within the space.

This app adds a wild range of colors to the real world. It adds entertaining, eye-catching GIFs to the screen and turns any room into a festival of fun. There's a collection of prepared sets for various holidays from birthdays to Christmas, but users can also add images from the company's official website.

We know Snapchat as a fun social media with a focus on visual content and amusing, dynamic lenses. However, Snapchat also has an AR studio called Snap AR, which lets users create AR lenses and use them in the app. To date, 2.5 million lenses have been created by Snapchat users, and the number continues to rise.

Augmented reality isn't for entertainment alone, because it's also useful in e-commerce. Augment makes that point beautifully. It's a service that lets owners of online shops visualize their products and display them to customers. It’s also helpful in regard to sales in a given field or territory, where temporary offline vending will take place.

Another way to use AR is to experiment with a new look without having to buy cosmetics first. YouCam Makeup lets the user test the makeup options before buying one or more products. It makes for a more informed purchase because the range of brands and products is vast.

An AR app development begins with a question: How do you want your app to function? You and your team can choose one of the following approaches to AR functionality: 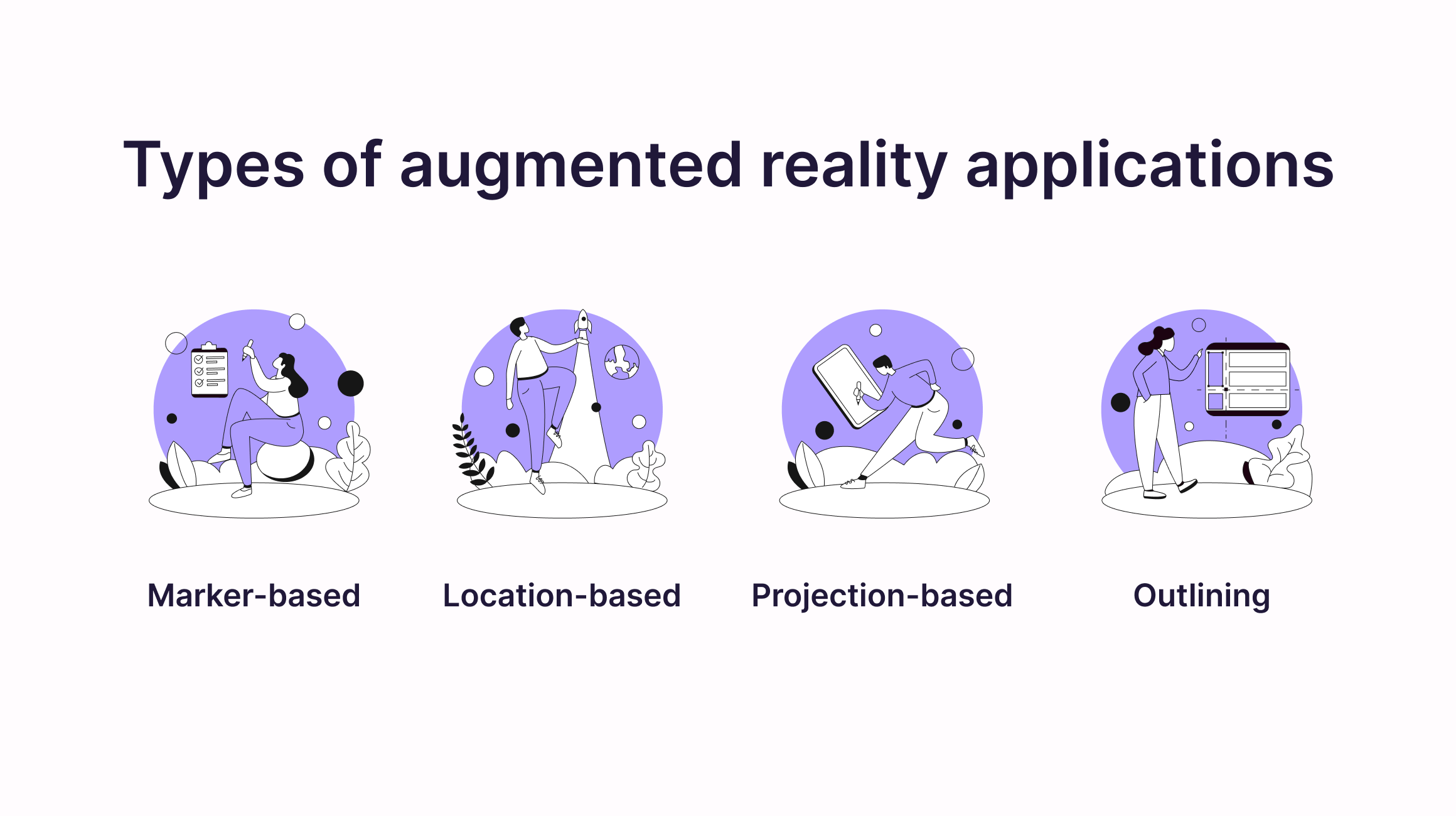 Let's talk about how those types of AR apps can help your business.

Domain-Based Strategy: The Benefits of an AR App

The majority of AR solutions are associated with gaming and entertainment. It’s obvious: Games place few limits on the imagination, so the potential for options is immense. We’ve already mentioned Pokemon GO, of course. It was a sensational hit just a few years ago. However, other industries have understood the potential of this technology and are using it to enhance user engagement: 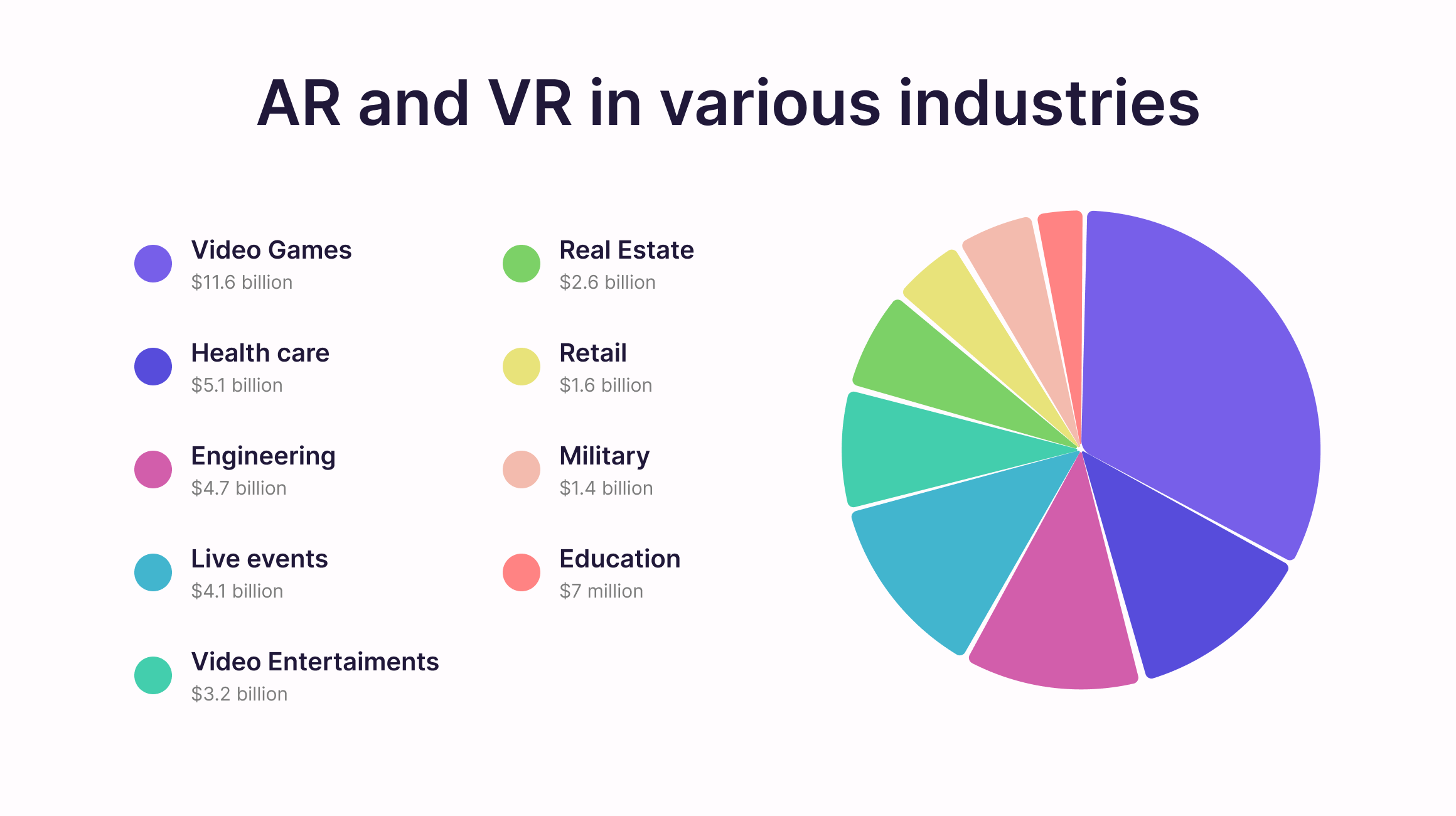 The use of AR software in healthcare isn't new, but there are still myriad options for its use in research. Today, many AR apps are used to train specialists and plan surgeries. Visualization makes such processes easier, safer, quicker, and more accurate.

VR can do a great deal for learning, which is inherently interactive. With augmented reality, the process of acquiring information and skills becomes more memorable and engaging. Students can see 3-D models of objects and interact with them instead of simply looking at two-dimensional pictures in books. This makes AR particularly useful in the fields of biology, physics, chemistry, and the arts.

Although e-commerce has changed the way people purchase goods and services, there are still some types of products that consumers want to see and touch before they decide whether to buy. AR is ideally suited to that purpose. For example, the user can try on clothing and makeup in real-time without having to visit a brick-and-mortar store.

Many brands use augmented reality for the purpose of promotion. Sure, it doesn’t look like "Blade Runner 2049," but some cases are worth mentioning. For example, Lacoste boosted sales with an AR app that used virtual try-ons, and Patron Tequila made a promotional app with which the user could have his or her own field of agave plants.

Architecture and real estate offer considerable promise in regard to augmented reality. With the help of three-dimensional modeling, it’s easy to understand whether a structural design will fit a given location.

Generally, regardless of your business area, the creation of an AR application will contribute to your communication with clients. It will also provide access to new opportunities.

There are plenty of software development kits (SDKs) that will help you and your team build an augmented reality app. Sure, the tech stack you ultimately choose will be contingent upon the app’s specifications, complexity, and purpose, but some tools have already demonstrated their value in the creation of AR solutions.

This is one of the most popular SDKs for mobile AR development because it tracks marks in real-time and places objects in an image of the actual environment. Additionally, the SDK supports text recognition with an extensive vocabulary.

Google’s AR framework gives you the power to create engaging, attractive compositions. ARCore can track motion, analyze the lighting in the room and define the angles. These features contribute a lot to the realism of virtual objects.

This framework has a feature called Visual Inertial Odometry, which precisely tracks the real-world environment so as to position objects with extreme accuracy. It's also very good in regard to face tracking.

This SDK was originally built for use in the creation of location-based AR apps. However, Wikitude gradually acquired image recognition, tracking, and the Simultaneous Localization and Mapping (SLAM) feature, which makes it one of the best SDKs for AR apps.

The Kudan SDK can help you create marker-based and markerless apps. With the latter approach, it uses elements (such as corners and edges) within the environment as points and boundaries.

Here’s a comparison table of the tools we've mentioned:

It's important to define the process of creating an AR app because it will give you a clear vision of your goals. The following steps should be completed if you want to make a successful app:

It’s hard to say the exact budget for AR application development since it depends on many factors that you must take into account:

If we estimate the time needed for basic AR application development, it will look like this:

Because the average hourly rate in Eastern Europe is $40/hour, the first version of the app with basic functionality or AR app MVP will cost approximately $30,000 to $40,000. However, a more sophisticated application with greater functionality will cost $100,000 or more. Please note: This sum doesn’t include post-launch support.

Pitfalls of AR Mobile App Development You May Face

We have already covered almost all aspects of AR development. However, there is one more important aspect to mention: What risks you may potentially face while working with this technology. 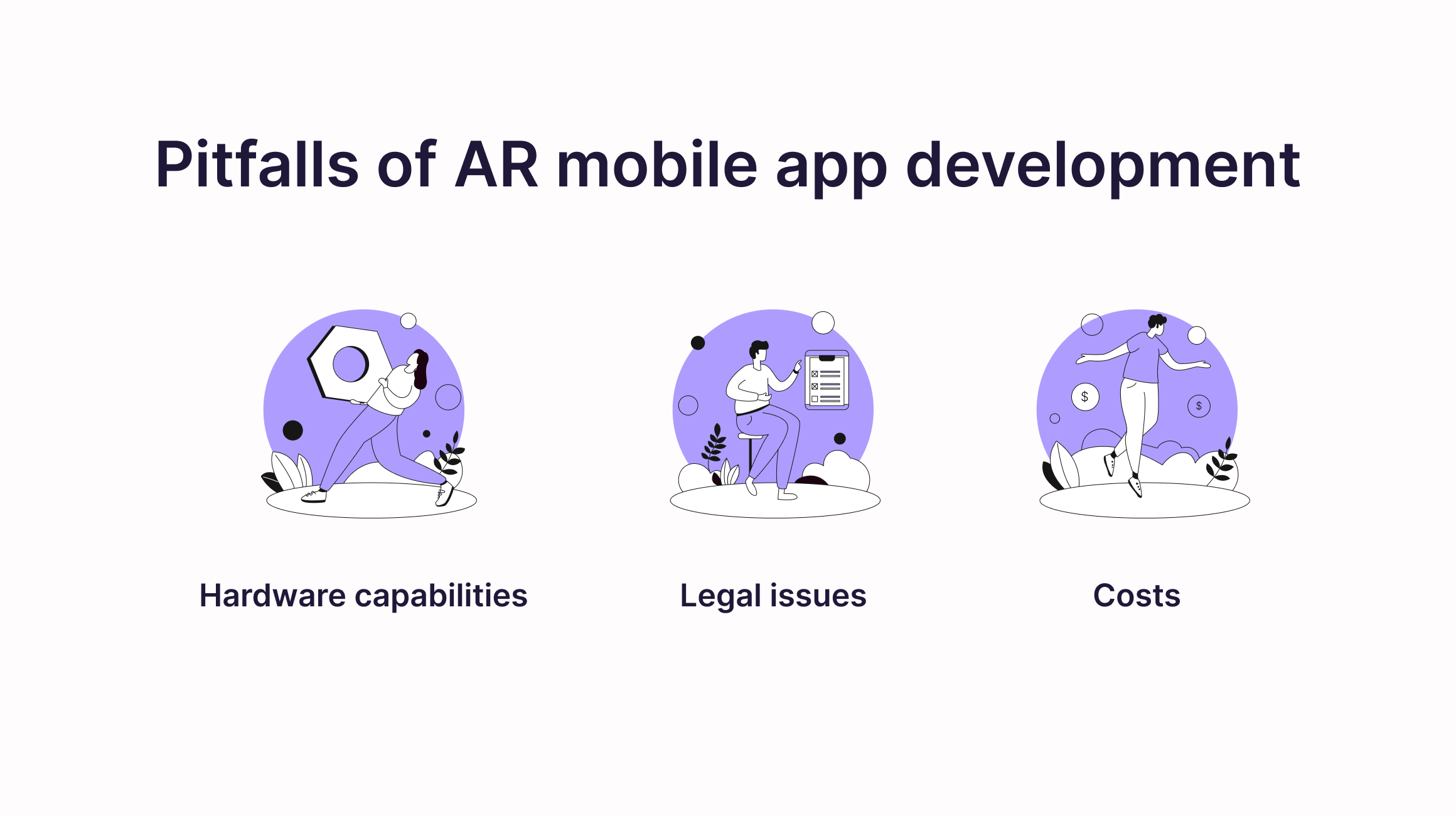 Augmented reality encompasses a wide range of usage cases, but many more will emerge in the coming months. So, by experimenting in an effort to offer something better you'll attract potential customers who want a unique experience. This is your opportunity to become a market leader and get the benefits of adopting mobile AR for your business.

🕶️ What is augmented reality?

Augmented reality (AR) is a technology that displays virtual objects over the real world in real-time.

🕶️ What's the difference between AR and VR?

Augmented reality places digital objects into the real environment, but virtual reality immerses the user in a fictional world.

🕶️ How can AR benefit my business?

AR can significantly boost your sales and make communication with the audience more engaging.