In the software development world, there is one misconception that almost everyone believes is true, but actually, it’s not: That mobile apps and web apps are the same thing. Actually, this cannot be any further from the truth. In this article, we’re going to explain the difference between mobile apps and web apps, their pros and cons, and which one to choose depending on your business needs.

In order to answer the question “Web app or mobile app?”, it’s important to understand what they are and what’s the difference between them. So, let’s start with the basics and a short explanation of these two terms.

Mobile App: What Is It?

Do you have TikTok, Whatsapp, or Facebook Messenger on your phone? Then it means that you’ve installed mobile apps on your device. Mobile apps are built for a specific platform – App Store for iOS devices, Play Market for Android devices – and have access to a device’s internal resources like camera, location, or GPS. 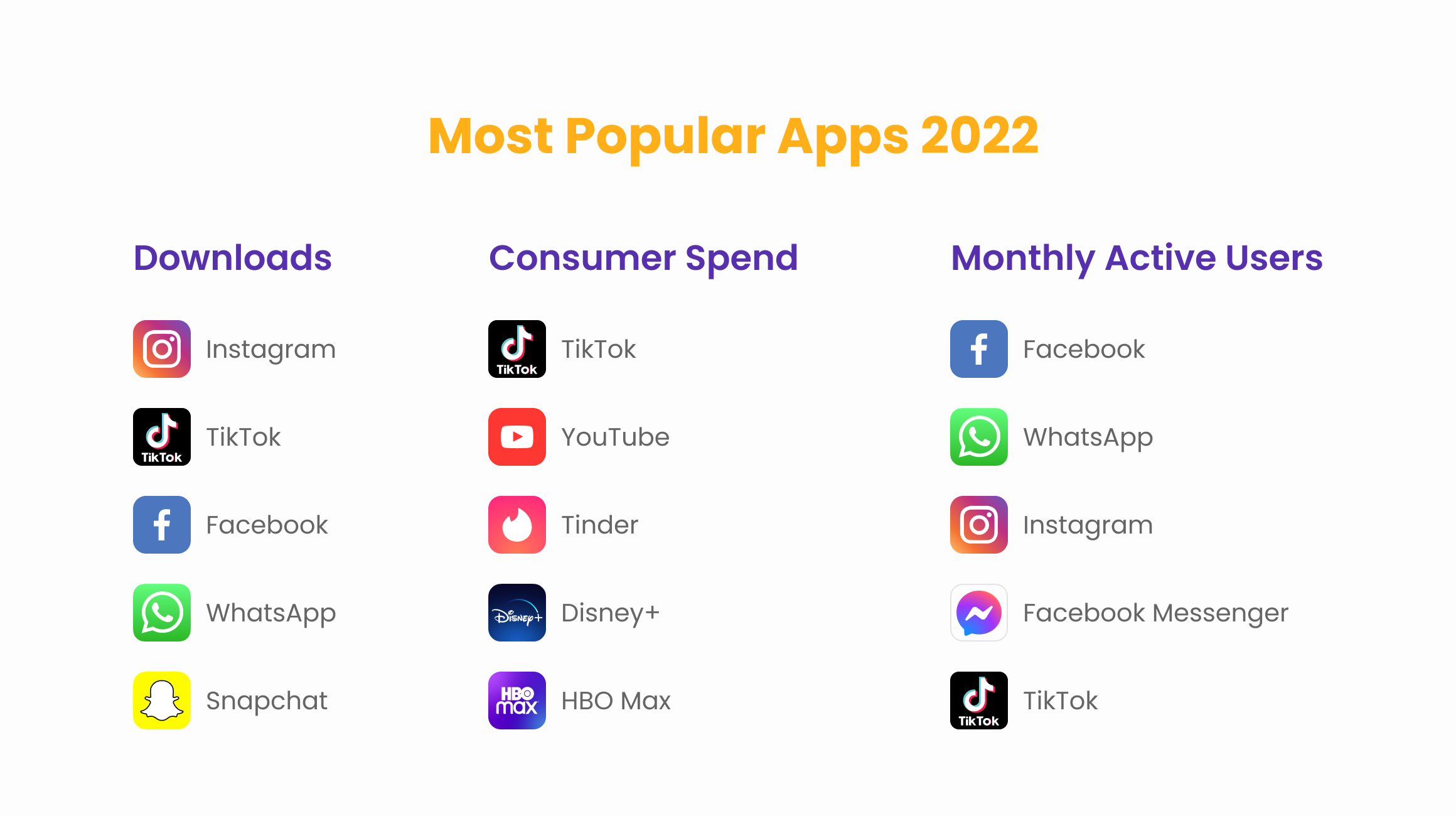 However, this is a very simplified explanation. To dive deeper into the mobile app development process, we’ll cover major development approaches—native, hybrid, and cross-platform. 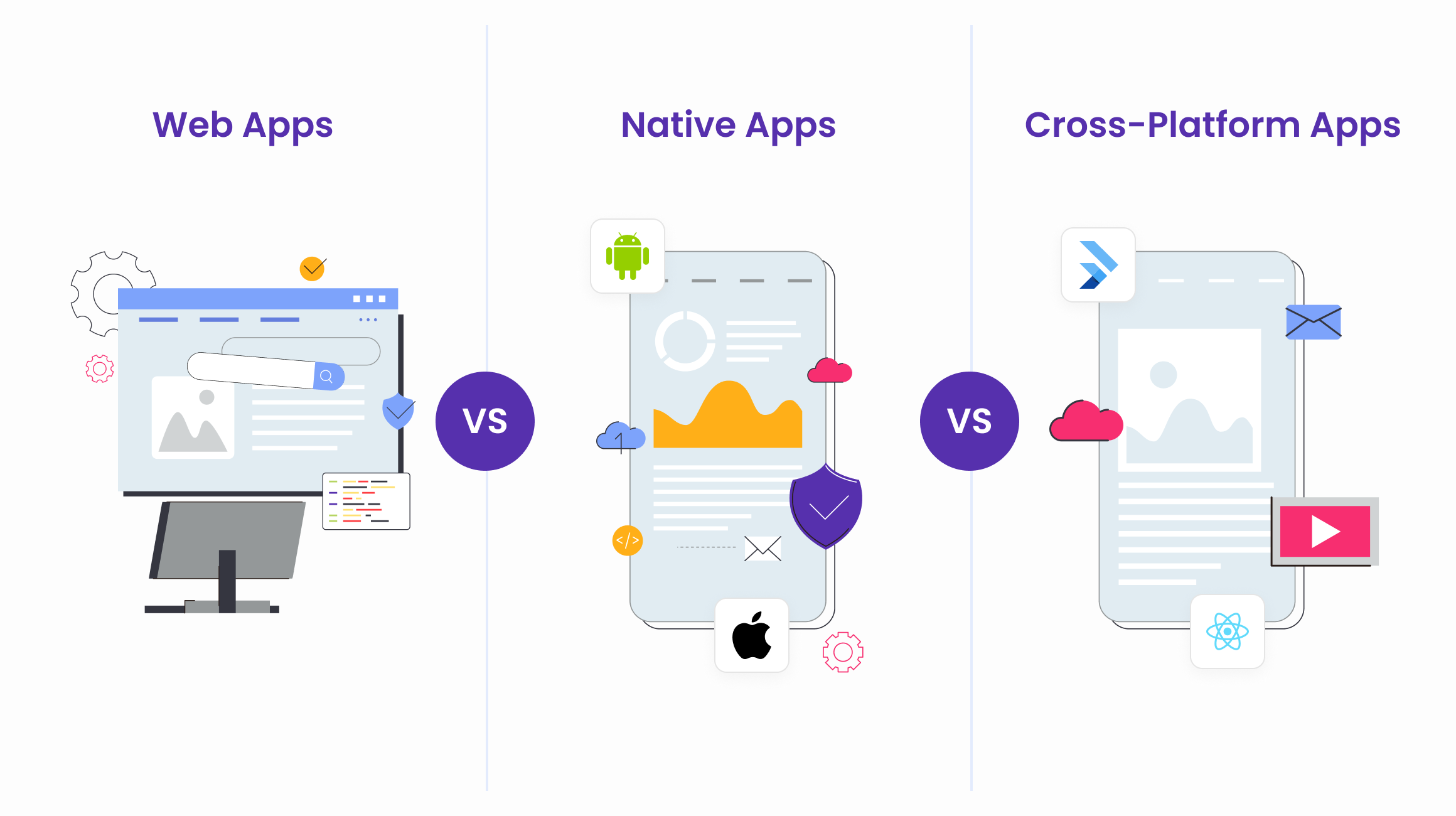 Native apps are built for a specific mobile operating system. This is where their name comes from–they are native to a specific platform. That said, you can’t install iOS apps on Android devices, and vice versa, because the coding for these two systems is very different.

Java and Kotlin are the most used programming languages when it comes to Android app development, and Objective-C or Swift in the case of iOS app development.

The native app development approach provides users with a platform-specific user experience and excellent performance. However, this approach is much more expensive for entrepreneurs, as they have to pay for Android and iOS app development separately, in case they want to reach both platforms’ audiences. Happily, there is a way out.

This development approach allows developers to write code and then reuse it for different platforms. In other words, the same codebase is used to develop for both platforms. It’s much cheaper than developing native apps, so entrepreneurs adopt this approach when they need to build an MVP and test their ideas fast.

Cross-platform apps are also safe, robust, and easy to maintain. The list of programming languages used in this approach usually includes HTML, CSS, Java, and JavaScript.

Hybrid apps are basically web apps and native apps combined. How can it be possible? The answer is simple: Developers utilize native app plugins for the codebase written in web development programming languages.

These apps are usually built on JavaScript, CSS, and HTML 5 with an integration of native app plugins.

If you want to get into details about the differences in app development, here’s the article about it.

Which to choose? There’s no definite answer as it depends on many factors, including your budget, business goal, target audience, etc. To simplify things for you, here is the list of pros and cons of mobile apps vs. mobile websites. Let’s start with mobile websites.

Responsive mobile websites display well and provide users with a great experience across various mobile devices. Moreover, it costs less to update a website and users don’t need to download an updated version.

As per the cons of mobile websites, there are two main inconveniences: users can’t access mobile websites offline and the apps cannot reach the smartphone’s native features, such as camera or GPS. 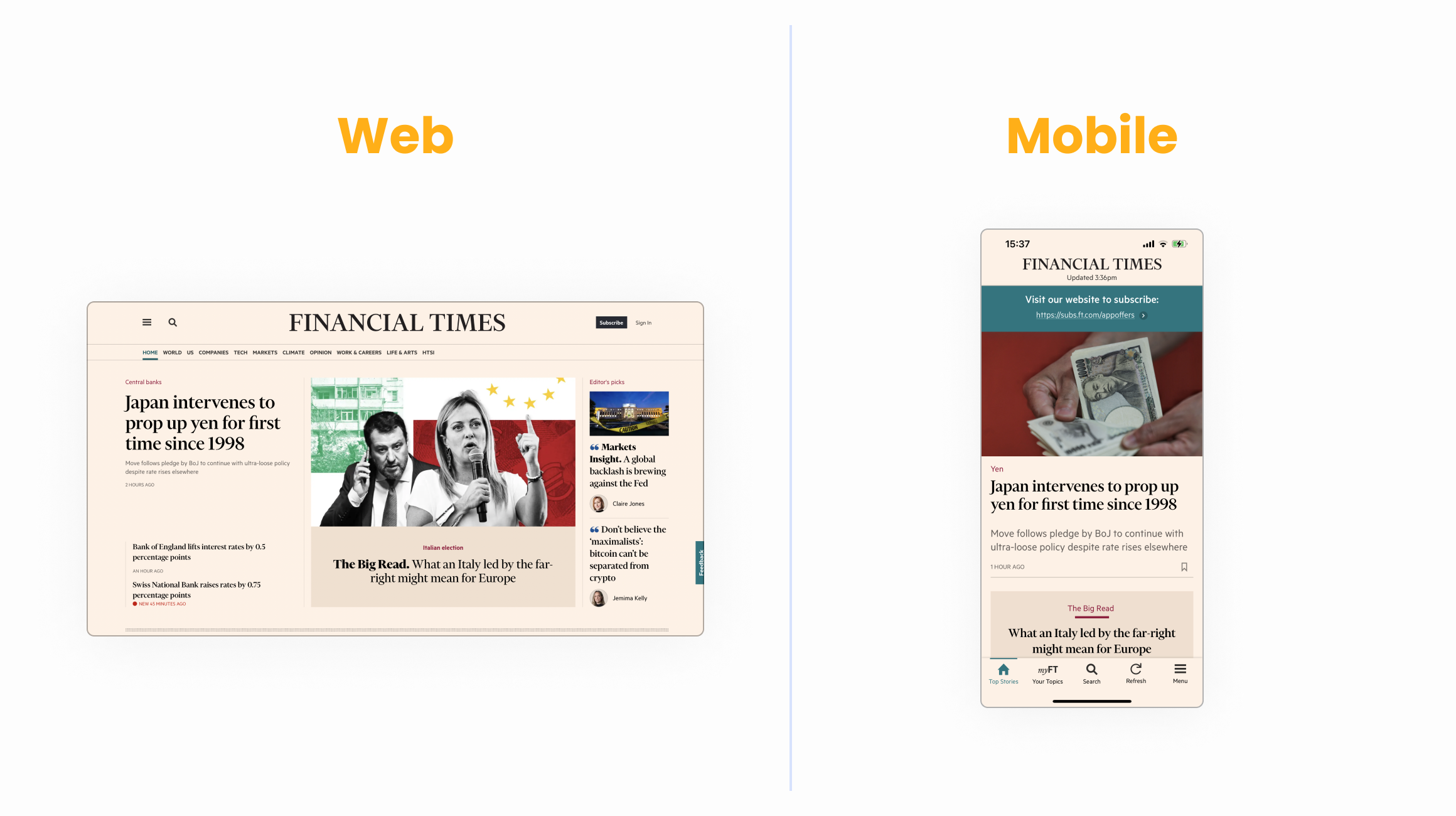 Mobile apps, in their turn, can work offline, can access a smartphone’s native features, and are able to provide users with a personalized experience. However, the updating cost is much higher. 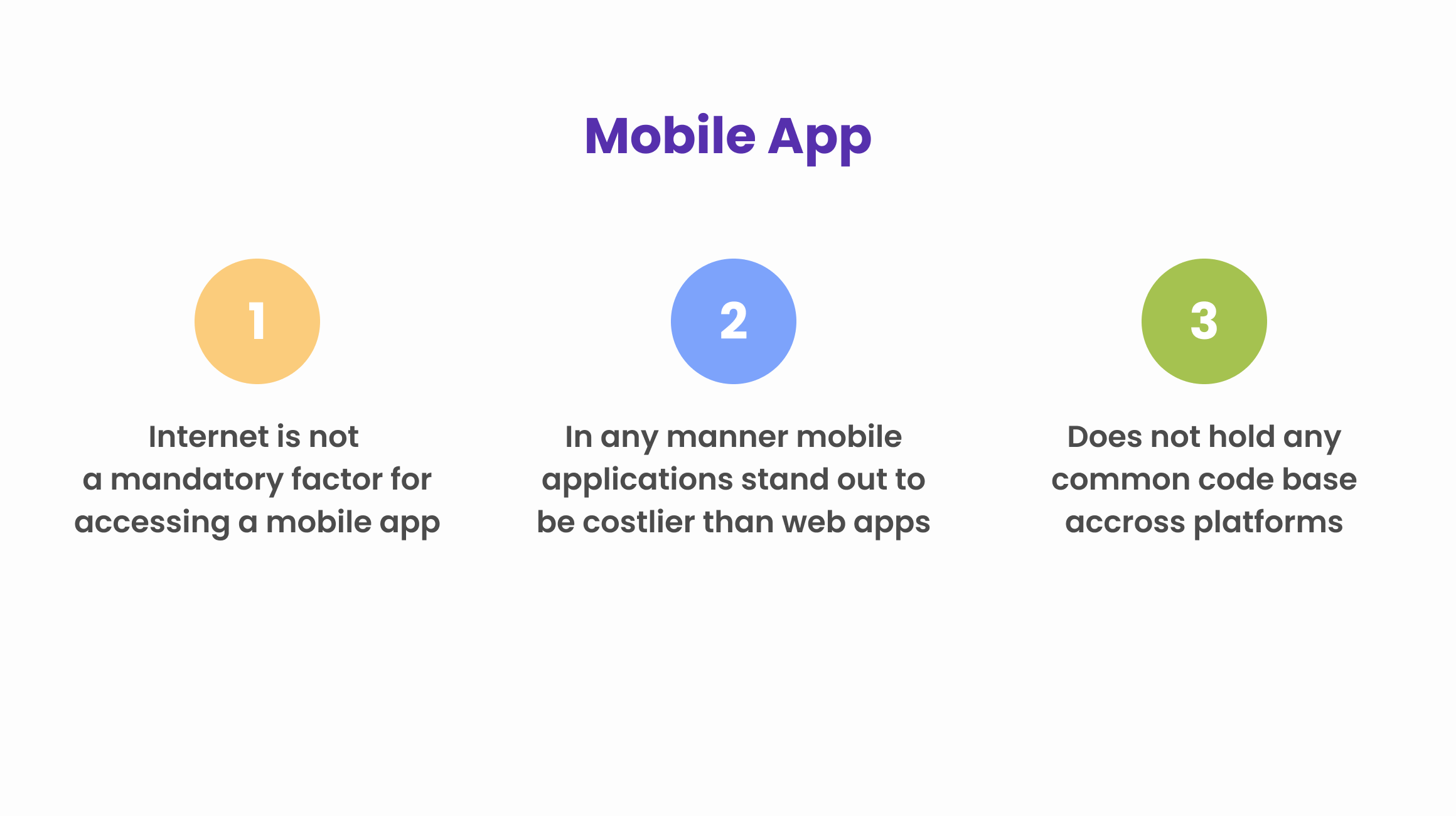 A web app, in its turn, doesn’t need to be installed or downloaded and is accessible via the Internet browser. Essentially, this is a website that is very responsive and adapts to any device. On desktop or mobile browsers, they are supposed to display equally well. Mobile-friendly web apps look very similar to mobile apps, that’s where the misconception comes from.

Ok, cool. Now we’ve covered the basic differences between web and mobile apps, but to make it all clear, it’s worth describing what is the difference between an app and a website real quick. Mobile app, web app, website, oh my! But it’s actually very simple: ​​web apps are designed for interaction with end users while websites basically contain static content.

Just like web apps, progressive web apps don’t need to be downloaded, are able to work offline and load quickly. It makes it possible to give them some of the native app functionality such as push notifications,  or native video and audio capture. 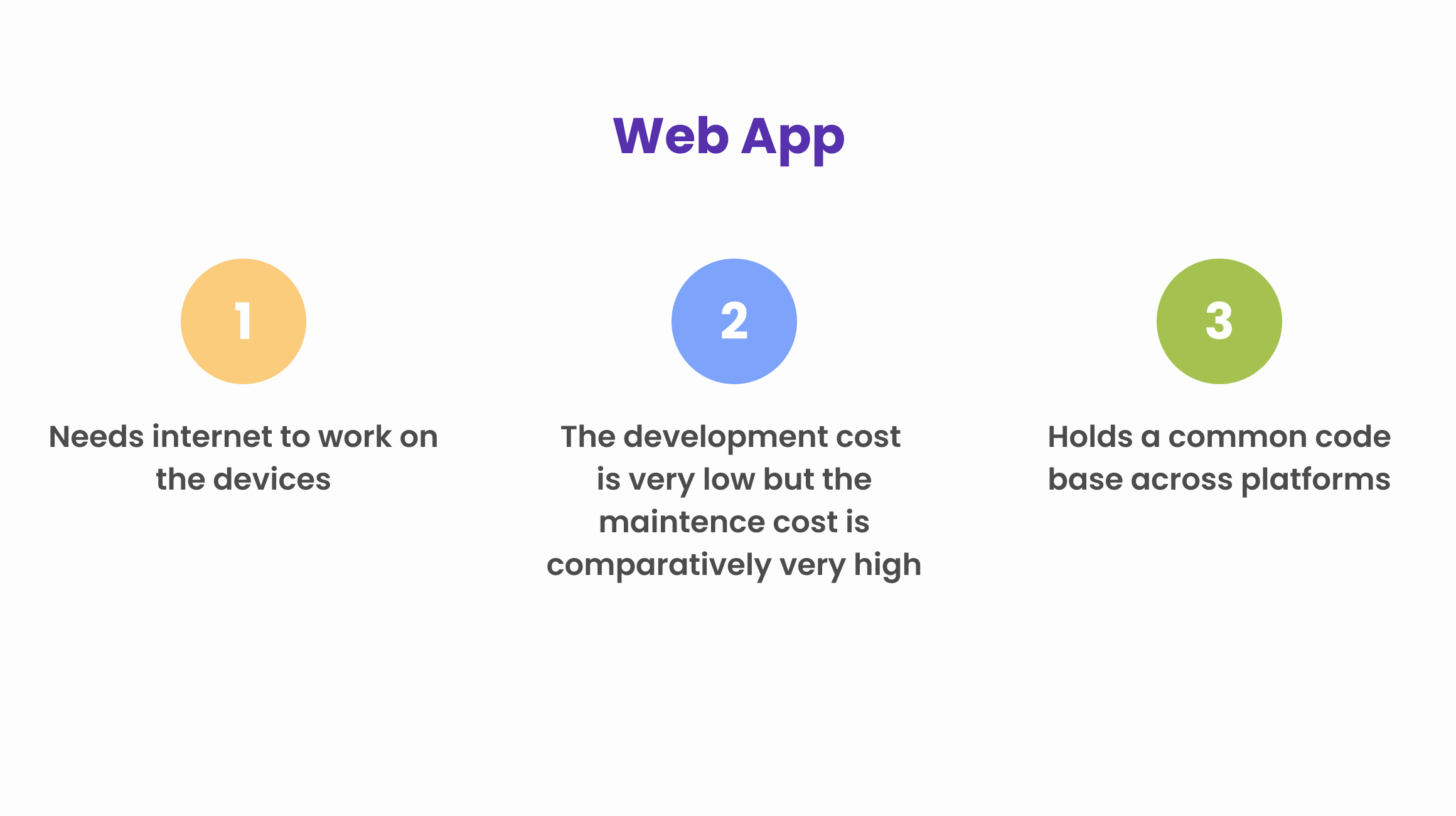 Key Difference Between a Web App and Mobile App

To make it simpler, we’ll put some key differences between the two types of apps in a table.

Pros and Cons of a Web Application

Now that you know the difference between a web and mobile application, let’s recap their pros and cons.

Recent statistics show that there are 1.96 million apps on the App Store and 3.48 million apps on the Google Play Market available for download. The average American checks their phone 262 times per day and spends 88% of their screen time on apps. So, what does a mobile app have to offer users?

Android apps also need to get verified by Google Play Market’s team. The verification process usually takes seven days, and unlike iOS apps, developers always get an explanation if the app gets rejected.

How to Make the Right Choice?

For now, we’ve covered the difference between mobile and web apps and how they are built. But how do you know if a certain type of app will help you achieve your business goals? Ask yourself these seven questions.

If the answer is yes, then a mobile app is the right choice for you. Always keep in mind the use cases of your app. It may occur that users have troubles with Internet connection but still need to use certain features. Some of the examples include:

2. Are speed and performance of crucial importance?

If you say, “Of course!” then the answer is definitely a mobile app. It performs faster because it stores data and important information on the phone and doesn’t have to download it from the server.

3. Do you want to attract the audience from a specific platform?

Say you want to build an app for the USA market. You consider this region as your top priority but don’t mind if people from other countries use it too. As we’ve already mentioned, web apps are less discoverable, while mobile apps can be found with keywords on App Store (iOS) or Play Market (Android). That said, if you create a product for a particular segment, then a mobile app is the way to go.

If the whole world is your audience and you don’t aim at a particular region, then go for a web app. For web apps, you can use the same marketing tools (SEO, Google Ads, etc.) as for websites, which gives you the chance to cover more people. Moreover, the user flow is easier and shorter in the case of web apps as your potential users won’t need to download the app.

If you need those, then you can choose between mobile and web apps. The only difference is in the performance and the efficiency. Mobile apps give better performance, thus web apps can access most smartphone features, except for geo-targeted and in-app push notifications.

To sum up, you can choose between these two types but if the performance is a crucial aspect, then go for a native mobile app.

6. Will you need to update your app often?

If so, then it’s better to build a web app first, as updating is easier both for developers and users. It’s easier for developers due to common frameworks and more convenient for users as they won’t need to download an updated version.

7. What do your competitors do?

Constantly analyzing your competitors is a must-do for building a successful app. Analyzing their actions, what works for them, and what doesn’t will give you priceless insights for your product. So, do they have a web app or mobile app? If they’ve chosen a particular strategy, then they might have a solid reason for that.

The choice between mobile and web apps is really hard to make because there are plenty of factors to consider. And you don’t have to deal with this alone. We at Yellow have been making all sorts of apps for startups, medium-sized, and Fortune 500 businesses for seven years, and would be glad to help you decide and turn your idea into an up-and-running mobile or web app. Contact us to discuss your idea, it’s free and has no obligations.

Anyway, whichever option you pick, we recommend starting small and building an MVP first. This approach allows you to spend wisely, test your hypothesis, and constantly improve your product when needed.

Mobile App or Web App: Wrapping It Up

So, which one do you choose, a native mobile app or a web app? The answer depends on your goals and available resources. For example, if you have a clear picture in mind about the target audience of your future product or you understand that you’ll update the app often, then the answer is pretty much ready.

But if you still ask yourself  “Should I make a mobile or web app?”, it’s okay to look for advice, especially from a team with experience in the software development field. At Yellow, we have 7 years of experience in application development and have a keen eye on trends and cutting-edge technologies used for it. Feel free to contact us for a consultation, it’s free and has no obligation.

✔️What is a mobile app?

It’s software designed to run on a mobile device.

✔️What is a web app?

It’s a software program that is stored on a remote server and delivered over the Internet through a browser interface; it looks just like a website.

Mobile apps and web apps are both good and have a list of pros and cons, and you only have to determine what your business needs to make a choice.

✔️What type is cheaper to build?

Web apps are cheaper to build in comparison to mobile apps. Nevertheless, we highly recommend starting with an MVP and then scaling or even making a pivot if needed. This approach will save you money and tons of resources.